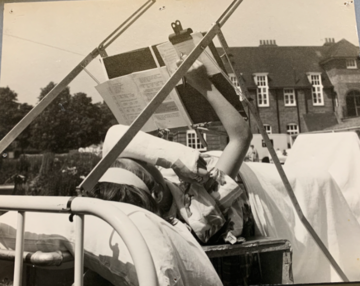 As part of my on-going PhD research, I am exploring the educational experiences of children with physical disabilities using the testimonies (oral histories) of 53 individuals who grew up with a physical disability in England after 1944 (part of the Disability Voices Collection at the British Library). Oral history is a method of research in which an individual/ group are interviewed to gain information about the past and their speech is recorded. Oral history interviews can be used to find out about a particular event, movement or experience in somebody’s life, or it might be to gain insights into a person’s whole life story as they understand it. Historians then analyse their memories of the past. Oral History, as a term, captures this whole process. Oral history has played a crucial role in ‘recovery history’, the practice of interviewing people to provide evidence about the past that cannot be found in conventional sources or in archives, or to uncover ‘hidden’ histories of individuals/ groups which do not feature in mainstream accounts.[1]

My research reveals the crucial role that children could play in making mainstream schools accessible to children with disabilities during a period in which state aims for integration went largely undelivered. My research further shows how children challenged the labels – designed to classify their minds and bodies – applied to them by adults and how these labels fundamentally shaped the relationships between children and their teachers.

This can be seen through one case study taken from my research.

Physically disabled children experienced many forms of educational inequality between 1944-1970. One of the most common concerns raised by individuals was the difficulty of securing a place in a mainstream school. The 1944 Education Act had recognised in law that disabled children should be educated in mainstream schools. However, a desire to protect the perceived intellectual needs of ‘normal’ children meant the Act also sanctioned the ‘deselection’ of disabled children from mainstream schools. Undermining its own objective for integration, the 1944 Act only enabled children to be sent to a mainstream school only as far as it was considered ‘practicable’ and in cases where their disability was not considered ‘serious’.[2] Guidance on the Act issued in 1945 further stated that children may be educated in mainstream schools only if ‘his presence is not detrimental to the interests of other pupils’.[3] This was a power used widely by Local Education Authority (LEA) staff to exclude children from mainstream schools. This was perhaps because the Board of Education saw teachers as crucial in identifying children with disabilities. It was argued that ‘the success of ascertainment rests largely on their shoulders’ as most disabilities would not be found until children started school as ‘Teachers have far closer and more continuous opportunities for detecting the presence of physical or mental disabilities among their children than anyone else’.[4]

In this period devoid of disability discrimination legislation, parents could secure a mainstream education through informal, creative arrangements made with schools. These negotiations often relied on children, whether as young carers or educators in their own right. This is best illustrated through the case of Barry and his brother, Dennis.[5] Barry was interviewed alone, on 9 May 2005 as part of a project titled: 'Speaking for ourselves: an oral history of people with cerebral palsy'.

After Barry’s local primary school refused to accept him and the LEA only offered a special school, Barry’s father kept him off school for a year and faced a tribunal to secure his son a place in a mainstream school. As Barry summarised ‘he told them that I could go to school, with my younger brother …  and if I needed some help, my younger brother could help me out.’

At the tribunal it was agreed that Barry could go to school with Dennis. Barry explained:

my brother sat with me and things like this. … and at home, I mean, we used to sit at home at night, and he use to show me how to write the letters, like a, b, c, d…  , one, two, three, and all this sort of thing, and, eventually I sort of mastered the art of writing, …. mastered me times tables, … doing joined- up writing.

Dennis also helped Barry ‘to join in games and to enjoy, you know, different things, and we found … different ways round things … he did seem to, you know, look at things and say, ‘Ooh I bet our Barry could do this, this way.’

Barry articulated the role Dennis played in his education in finding creative ways that enabled him to participate in all aspects of school life. As such, Dennis took over the responsibility of implementing the Special Education Treatment adjustments required of school staff. Dennis’ help also extended beyond the classroom. In using an alternative teaching style based on demonstration which suited Barry’s learning needs, Dennis helped Barry to consolidate his classwork at home, securing his success at school. Although Barry did not think about the implications for Dennis in his role as young carer and teacher, he constructed Dennis’ labour in terms of his family’s day-to-day practice of helping one another out.

Children were able to challenge and limit social inequality. It was often the teaching and labour performed by untrained, child peers, rather than Local Education Authority employees, that facilitated a mainstream education for physically disabled children. Limited resources due to a lack of investment by Local Education Authorities and a shortfall of teachers meant national aims for integration went undelivered. Of the 14 individuals in my sample who had at least been partially educated in a mainstream school, 8 stated they depended on or peer or familial labour. Children’s labour was crucial in the implementation of national policy where state welfare provision failed to support integration.

Exploring children’s day-to-day experiences in mainstream schools further reveals the way children moulded their own care. It further demonstrated how children questioned or rejected adult attempts to label and categorize their minds and/ or bodies. Post-war pedagogy classified children by variation of ability. In other words, it was recognised that even children of the same age learnt in different ways and that each child had different aptitudes. Ideally, the education a child received should be suited to their accorded ability and needs, but as it was impractical to give each child an individually tailored education, a set of averages had to be found. In measuring children as a mass group, an ideal, ‘normal’ child was constructed. Those who fell outside of the behavioural, emotional or attainment expectations for their age group were made abnormal, with many formally categorized ‘Educationally Subnormal’.[6] This was a powerful category of disability, introduced as part of the 1944 Education Act.

If we return to Barry’s experiences in a mainstream school, we can see how normative expectations of behaviour and academic progress were imposed on children, how disabled children could be further marginalised in being classified as intellectually abnormal, and how some children responded to being labelled.

As I got older and got more mature … I realised that, you know, you can, you can achieve this … and I sort of, did, tried to do things in different ways, and whichever way turned out to be the best for me, is the way I did it. I... It had an effect, on the way they looked at me … they said, ‘He don’t do things the way we tell him to,’ so they automatically put a label on yer. You are educationally subnormal.

In adapting standard teaching methods to make them accessible, Barry took charge of his own education. It is possible that his teachers interpreted Barry's changing of their methods as undermining their own expertise and authority. Despite achieving the same results, Barry was marked out as ‘subnormal’ in failing to learn in the way his teachers expected. Barry constructed his child self as rejecting his categorisation as ‘subnormal’, a label which left a deep imprint on him.

Now then, I kick back at that, because they were putting that label on me, because I wasn’t doing it, the way they wanted me to do it, but on the other hand, I was achieving the same result on doing it within my physical and mental capabilities.

Barry did not elaborate on these interactions with teachers, but he did finish mainstream education, suggesting his rejection was successful during a period in which labels were increasingly applied to large numbers of children identified as beyond ‘normal’ provision. Children, then, were not the passive objects of institutional measuring and categorization. The ability of children to speak back to labels reveals that the balance of power between state officials and children were not simply imposed, but were complex and multidirectional. Classifying children’s minds and bodies involved [sometimes fraught] negotiation between multiple individuals and could be a drawn out, complicated process.

Exploring the agency of children and their peer relationships therefore reveals how they moulded their own care, curtailed educational inequality and how children contributed to social change in mid-twentieth-century Britain. Children were the forerunners in demonstrating how children with disabilities could be supported and do well in mainstream education.

Resources if you would like to learn more about the history of disability, education or oral history:

[6] To find out more, see: Laura Tisdall, A Progressive Education? How Childhood Changed in Mid-Twentieth-Century English and Welsh Schools (Manchester, 2020), chapters 5 and 6; Bonnie Evans, ‘The Foundations of Autism: The Law Concerning Psychotic, Schizophrenic, and Autistic Children in 1950s and 1960s Britain’, Bulletin of the History of Medicine 88(2), 2014, pp. 253-85.