‘We never thought about the difference between one county and another before that change was made,’ explained Reverend John Robert Meara, whose rural parish straddled the wandering line that separates two Irish counties. It was May 1925, and Meara had taken the short trip to Enniskillen to address the Irish Boundary Commission on behalf of his own Church of Ireland congregation and the local Presbyterian community. The eight years since his arrival in the district had transformed Ireland and upended the lives of those to whom he ministered.

The Government of Ireland Act, 1920 and Anglo-Irish Treaty of 1921 had elevated the old county limit into a boundary between states. On the one side, Northern Ireland, a region of the diminished United Kingdom administered by a devolved parliament, on the other, the Irish Free State, a dominion within the British Empire that would become a Republic in 1949. Violence had visited many parts of Ireland, the borderlands being no exception. Partition was accompanied by deaths and injuries, kidnappings and arrests, military checkpoints and property destroyed. A little over two years earlier – on April Fool’s Day 1923 – the new frontier had assumed the status of a fiscal barrier. Although in principle opposed to partition, Dublin’s desire to take control of tax and trade saw customs huts erected on the border. 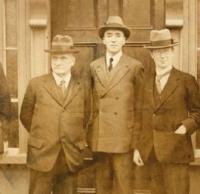 Although a part of Meara’s parish was in Fermanagh – one of six counties constituting Northern Ireland – the church, school, parochial hall, and Protestant Union hall were all in County Monaghan. Known as the Drummully salient, this isolated portion of Irish Free State land was entirely inaccessible except through the neighbouring jurisdiction. Such was the confusion that for several years following the establishment of the border, no marriages conducted at the church had been legally registered with the authorities in Dublin.  The journey to local markets in nearby Clones or Monaghan Town involved crossing the border twice. ‘We are treated the same then,’ bemoaned one local farmer, James Garland, ‘as Northern Ireland people’ returning home with dutiable goods.

Home to sixty-three families and more than 400 residents, Drummully was one of numerous anomalies that the Boundary Commission was expected to resolve. The new border sliced through houses, parishes, and at least one village; cutting towns from their hinterlands and homesteads from their farms.

Established under the terms of the Anglo-Irish Treaty, the Commission was charged with redrawing the Irish border to be consistent ‘with the wishes of the inhabitants, so far as may be compatible with economic and geographic conditions’. Throughout the spring and summer of 1925 its three members met with rival unionist and nationalist delegations – amongst them farmers, merchants, clergy, politicians, and landowners – who pressed their case for inclusion or exclusion from one or other territory. The enactment of partition had placed substantial populations on the ‘wrong’ side of the divide and many now sensed that this was their moment to have that situation rectified.

But despite their polarised positions, there was much that their descriptions had in common. Passing the border now meant red tape and inconvenience: delay, long detours in places to reach one of a limited number of customs stations, and frustration at the hands of an inflexible bureaucracy. For those carrying cargo, even non-dutiable commodities had to be recorded ‘for statistical purposes’.  Farmers, less used then than now to filling forms, were loath to do so.

For some, it seemed that time itself was out of place. Until 1916, Dublin (or Dunsink) Mean Time, had ran at twenty-five minutes behind its Greenwich counterpart. Its abolition, combined with the introduction of Daylight Savings Time, had pushed Irish hands forward by almost an hour and a half in summer. Many farmers, stuck to what worked best for them.  Although not until, and only during, the Second World War, would North and South operate on different time zones, those hoping to make it across the border with goods had to arrive by 5 p.m. or pay an additional charge. ‘The five o’clock comes too soon,’ complained Alexander Bryce. ‘We work on the old time an hour later.’

By the end of 1925, the Irish Boundary Commission had been shelved. The premature publication of its proposals in the British press sparked controversy and triggered the resignation of Free State representative Eoin MacNeill. The minor rectifications recommended by the remaining two members proved too small to induce London, Dublin or Belfast to risk reopening what was already beginning to look like an old wound. The Tripartite Boundary Agreement, struck between the three governments that December, confirmed the partition line along its provisional route. But throughout the twentieth century, the Irish border would remain a site of conflict between communities as well as states, punctuated by periods of violence.

Since the Good Friday Agreement in 1998 and the onset of the European Single Market at the start of 1993, many living along the Irish border have once again gotten used to not thinking much about the difference between one side and the other. We shall soon discover how far and how fast that is all about to change.