Matilda Fisher is a first year student at St Hilda’s College. Before Oxford, she attended Wallingford Secondary School, her local comprehensive. During the summer after year 12, Matilda was a participant on the UNIQ summer schools. In this post she recounts her experiences on UNIQ, and how it helped her with her application to study history at Oxford.

I attended the gender and identity history course on UNIQ back in August 2015, staying at Balliol. I am now in my first year studying history at St Hilda’s. 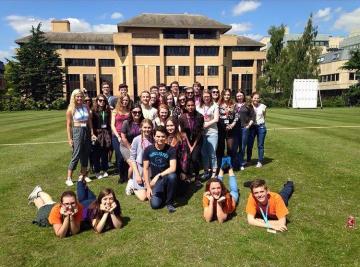 UNIQ gave a great insight into life at Oxford, which confirmed my desire to study here. Attending lecture on various topics ranging from cities in the nineteenth century to gender constructs in the Second World War sparked my interest on a variety of different topics. I participated in a seminar group and final tutorial, which allowed me to exchange ideas with the other members of my course and gave me the opportunity to experience firsthand the way in which history is taught at Oxford [insert link to info on tutorial system when the page has been sorted]. The process of writing an academic essay based on independent reading proved incredibly useful in helping me prepare for A-level work at school and helped me to understand the standards of work expected at Oxford. Topics I encountered during UNIQ also fuelled areas of further study. For example, reading about childhood and domesticity in the British Empire inspired my EPQ.

My week at UNIQ nerve-wrackingly took place the week before AS level results were released. Attending UNIQ meant that I was even more hopeful for good grades as my week at UNIQ confirmed to me that I would like to apply to Oxford. On a practical level, UNIQ proved incredibly useful for the application process, as the programme featured interview workshops with practise interview questions to answer and discuss. I found this incredibly useful in dispelling many widespread myths that circulate about Oxford interviews and it encouraged me to consider questions as starting points for discussion rather than parts of a test simply looking for the right answer.

However, more importantly for me, UNIQ boosted my confidence and confirmed to me that I would like to apply to Oxford. Having come from a family in which I was the first person to consider applying to university and having attended a school, from which very few people applied and even fewer got accepted into Oxford, before I attended UNIQ I knew I wanted to apply but was largely unsure about the process. UNIQ dispelled many of my preconceived myths about Oxford and the application process as well as giving me the opportunity to meet many different people from similar backgrounds as myself who also loved history and wanted to study at Oxford. The friends I met through UNIQ became invaluable sources of support during the application process.

To find out more about the UNIQ summer school, visit the website. Detailed information on the history courses, eligibility, and support on how to apply can be found here.  The deadline for applying is normally in late January.