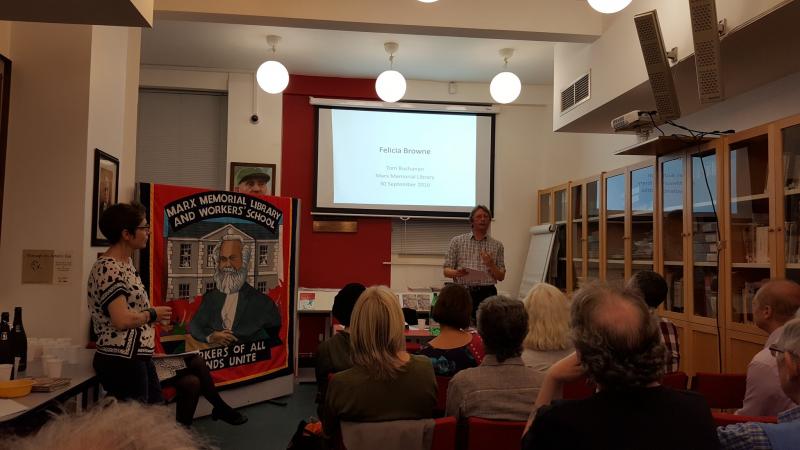 Tom Buchanan at the launch event at the Marx Memorial Library, London

Publicity for the Through an Artist's Eye Exhibition

Tom Bucanan writes about his recent work with the “Through an artist’s eye: Felicia Browne and the Spanish Civil War” Arts Council funded project:

I have been the “academic partner” for an Arts Council funded project entitled “Through an artist’s eye: Felicia Browne and the Spanish Civil War”. The principal participants are the artist Sonia Boue and the poet Jenny Rivarola. The project is an artistic collaboration in response to the life and work of Felicia Browne, a British artist who died fighting in the Spanish Civil War in August 1936. I have been interested in Felicia Browne since the mid-90s, when I was the first historian to have access to Felicia Browne’s papers. These were then in private hands, but have now been acquired for the Tate Archive and have been made digitally available. I published an article (“The Lost Art of Felicia Browne”) in History Workshop Journal in 2002.

I also spoke at an event at Kingston All Saints (6th October) prior to the opening of the exhibition at All Saints Church, Esher on Saturday 8th. The exhibition, which contains Sonia and Jenny’s work, as well as unseen sketches by Felicia Browne, will run until the end of the month.