Study something in depth that truly inspires you

In many ways, I didn’t seek out Gender History, I sort of fell into it.

Originally from Wakefield, West Yorkshire, Elizabeth Kent studied History and Politics at The Queen’s College (2016-2019.) Her undergraduate thesis focused on the cultural identity and political activism of female insurgents during the Mexican Dirty War (1964–1982) and was awarded the Olwen Prize for Best Thesis in Gender History. She is due to start a MSc in Global Governance and Diplomacy at the Department for International Development in 2020. 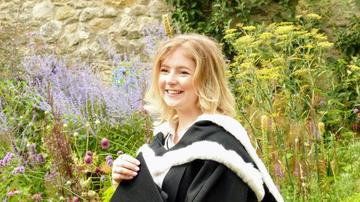 It is a truth universally acknowledged that university broadens one’s horizons both academically and personally. This could not be a more accurate description of my time at Oxford. Deciding to undertake Joint Honours, I knew I would have the opportunity to explore a real breadth of academic scholarship, but I didn’t realise how much freedom I would have to extend my existing historical passions and acquaint myself with new ones. History at secondary school can often feel quite restrictive (Henry VIII inevitably makes several appearances) and can make you unsure what your “passions” actually are. The History Faculty at Oxford is great at encouraging you to discover these by offering many diverse modules, alongside tons of support and resources allowing you to really deep dive!

I discovered my interest in my 2nd year with the opportunity to take a new paper, ‘Modern Mexico 1876-1994.’ Before this paper I had never studied Latin America - let alone Mexico - and knew very little about the history and culture of the region. The course traced the rich history of Mexico from revolution through to the twenty-first century and I learnt so much about a nation which is so distinctly different from my own European home. Through art, especially Mexican muralism, and revolutionary literature this course came alive in my imagination. It’s worth saying that before taking this course I knew very little Spanish but through the help of my tutors and the Oxford Language Centre this quickly changed; this shouldn’t be an obstacle for studying something you really want to!

Hence, when I arrived in 3rd Year and crunch-time came to pick a thesis, I knew I wanted to focus in on Mexico. In many ways, I didn’t seek out Gender History, I sort of fell into it. I was fascinated by the student protests of 1968 which culminated in the deadly Tlatelolco Massacre and its larger place in the history of radical politics in Mexico in the 20th Century. Simultaneously, I became aware of the highly exported images of Mexican womanhood and femininity of Frida Kahlo, La Adelita and Virgin of Guadalupe and the patriarchal and nationalistic socio-cultural forces which shaped them. I started to wonder how the image of the Mexican guerrillera – as the female members of radical groups were known – were shaped and removed by these forces. These seemingly unrelated strands eventually converged into my thesis, “La Guerrillera Mexicana: Tracing the Female Insurgent of the Mexican Dirty War.”

My focus eventually became three-fold looking at the cultural depictions of the guerrillera through the lenses of the state, the press, and the male guerrillero. Once I felt comfortable with my sources and my area of interest, I started to look into how my research fitted into existing area studies in Latin America and research on radical female activism in the twentieth century. I was able to explore many transdisciplinary themes, integrating Gender History with Mexicanist scholarship. It was incredibly rewarding to receive the Olwen Hufton Prize for the best thesis in Gender History and have my first opportunity to present a paper at the Radical Americas Conference at University College London in 2019.

Despite my area of study being so far away, I was enormously lucky with how many of my sources had been digitised and were available online. The university in Mexico City (UNAM) had a tremendous newspaper archive and I was also able to get access to a series of underground magazines published by one insurgency group. A particular turning point came when my thesis supervisor, Dr William Booth, managed to get me an expedited copy of a book of testimonials from former guerrilleras which had yet to be published.

Of course, it was not all plain sailing. I found myself enjoying the research and becoming increasingly nervous about the write-up. I was putting a great pressure on myself to “get it right” first time. A big piece of advice I would give to current undergrads (and prospective students!) is not to worry if your research takes you off in a direction you never planned for, this is a completely natural part of the process. Also, this is the biggest piece of academic scholarship you will have undertaken. Going through several drafts and re-writes is inevitable. Finally, remember that your supervisor is there to help in any way they can. They expect you to email them with problems so that they can help you find solutions. Don’t ever worry that your bothering them (except maybe if you’re emailing at 2am the night before submission!)

Perhaps the best thing I can offer is just to enjoy the opportunity to study something in depth that truly inspires you. Doing the thesis is the culmination of all the skills you’ve been honing over the past two years and holding the work in your hands when you finish is a great reward. It’s something you can, and should, be proud of.