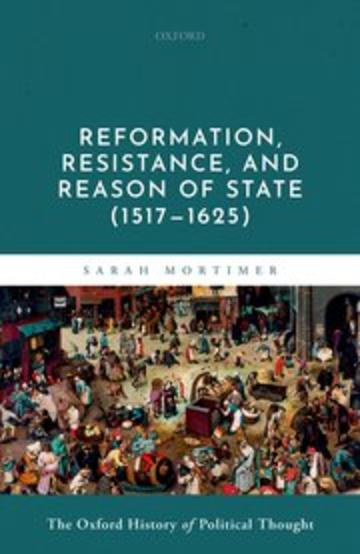 The period 1517-1625 was crucial for the development of political thought. During this time of expanding empires, religious upheaval, and social change, new ideas about the organisation and purpose of human communities began to be debated. In particular, there was a concern to understand the political or civil community as bounded, limited in geographical terms and with its own particular structures, characteristics and history. There was also a growing focus, in the wake of the Reformation, on civil or political authority as distinct from the church or religious authority. The concept of sovereignty began to be used, alongside a new language of reason of state—in response, political theories based upon religion gained traction, especially arguments for the divine right of kings.

In this volume Sarah Mortimer highlights how, in the midst of these developments, the language of natural law became increasingly important as a means of legitimising political power, opening up scope for religious toleration. Drawing on a wide range of sources from Europe and beyond, Sarah Mortimer offers a new reading of early modern political thought. She makes connections between Christian Europe and the Muslim societies that lay to its south and east, showing the extent to which concerns about the legitimacy of political power were shared. Mortimer demonstrates that the history of political thought can both benefit from, and remain distinctive within, the wider field of intellectual history.

The books in The Oxford History of Political Thought series provide an authoritative overview of the political thought of a particular era. They synthesize and expand major developments in scholarship, covering canonical thinkers while placing them in a context of broader traditions, movements, and debates. The history of political thought has been transformed over the last thirty to forty years. Historians still return to the constant landmarks of writers such as Plato, Machiavelli, Hobbes, Rousseau, and Marx; but they have roamed more widely and often thereby cast new light on these authors. They increasingly recognize the importance of archival research, a breadth of sources, contextualization, and historiographical debate. Much of the resulting scholarship has appeared in specialist journals and monographs. The Oxford History of Political Thought makes its profound insights available to a wider audience.