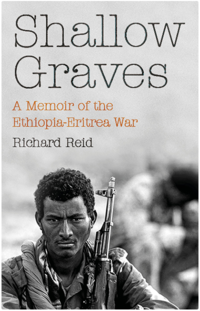 This is a personal account of the war between Eritrea and Ethiopia, fought between May 1998 and June 2000, as well as of the periods immediately preceding and following the conflict. Shallow Graves traces shifting local perceptions of time, the nation and the region, beginning in the mid-1990s and concluding with the peace agreement signed between the two governments in 2018.

Richard Reid is a historian who was based in Eritrea during the war, and who continued to visit both that country and Ethiopia for several years afterwards. This personal perspective offers a more vivid, intimate portrait of the experience of the war than can normally be offered by putatively ‘objective’ academic accounts. As well as providing first-hand reportage and analysis, Reid problematises the role of the historian—and specifically the foreign historian—as the supposedly impartial observer of events. His eloquent narrative, constructed around conversations and interactions with a range of local witnesses, friends and colleagues, explores the impact of prolonged war and its aftermath—both on private and public memory, and on the nature of history itself.