Leo Keay lives in Winchester and studied Modern History at St. Benet’s Hall.  After graduating in June 2017, Leo was awarded the 2018 Undergraduate Dissertation Prize by the Society for the Study of French History. Leo’s thesis was supervised by Professor Michael Broers and was on the subject of Talleyrand and the Origins of the French Expedition to Egypt 1797-8.

I chose to write my thesis on the 1798 French Expedition to Egypt because of my passion for Napoleonic history. I first became interested in this period at school, and further deepened my understanding of it at Oxford by taking the Revolution and Empire in France 1789-1815 Optional Subject in my First Year. I decided to write about foreign policy because it was the one area of politics which I had not yet had the opportunity to study in depth. In the first year, I had largely concentrated on French domestic politics, leaving me eager to understand France’s foreign relations in their own right. The Egyptian Expedition held especial appeal because of its exceptionality and exoticism: both then and since, observers struggled to comprehend why France sent forty thousand of her best troops on an unprovoked attack on the Ottoman Empire. By examining the correspondence of France’s Foreign Minister, Charles-Maurice de Talleyrand Périgord, I hoped to shed new light on this unique imperial episode. 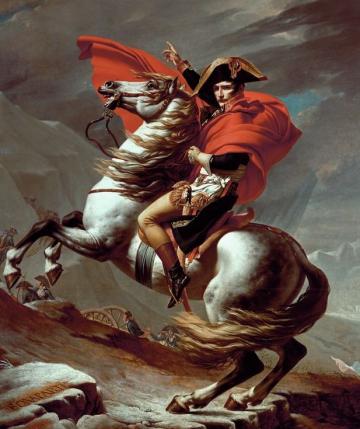 I conducted most of my research in Paris, working in the Archives Diplomatiques du Minsitère des Affaires Etrangères and the Archives Nationales. I relied on secondary literature to identify the relevant documents first, and then travelled to the archives both to examine the primary sources cited by secondary works and to search for any additional material they might have overlooked.  Archival research is a strange mixture of long periods of tedium and intense moments of exhilaration: much of the material I encountered was irrelevant, but I occasionally discovered documents offering valuable insights on the question in hand.

The most challenging aspect of thesis research was the use of inductive logic – creating an original theory based on the evidence. This involved going back to the primary sources to closely examine Talleyrand‘s rationale for the expedition. Most previous interpretations saw it as a measure to win the war against Britain, arguing that Paris intended to use Egypt to threaten London’s communications with India. In contrast, I found that Talleyrand’s main priority was to establish French primacy in the Mediterranean, which he deemed threatened by Russia’s expansion into the Black Sea. He therefore intended to use Egypt to contain Russia: either as base whence to launch an expedition against the Black Sea territories, or to give France the lion’s share in an eventual partition of the Ottoman Empire.

I found the thesis an immensely valuable and rewarding experience. It allowed me to undertake sustained and detailed research into a subject that interested me. I found this far more intellectually satisfying than the highly condensed essays which I had to produce for tutorials and exams. Furthermore, it provided me with a unique opportunity to pursue my interest in foreign policy, which I will continue to develop as I begin my Master’s in International Relations. Although this discipline principally relies on deductive logic to interpret foreign policy trends in light of general theories, I believe that my History degree will nevertheless prove relevant. I hope to deploy my skills in inductive logic to scrutinise the abstractions of IR theory. Furthermore, my strong command of factual detail will give me an excellent insight into the long-term causes of current international issues.

If you’re interested in finding out more about Napoleonic history, have a look at this website. There are some wonderful museums to visit to learn more about military history, international relations, and the history of war, including the Imperial War Museums in London, Manchester, and Duxford in Cambridgeshire, and the National Maritime Museum in Greenwich. It is worth also thinking about the commemoration of war. War memorials are familiar sights across the United Kingdom, but think about what these cultures of commemoration tell us about which wars are memorialised, by whom, and how.