A Passage to Britain 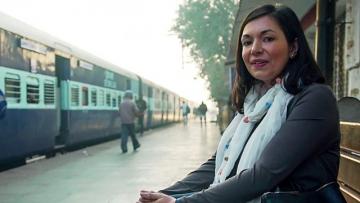 Thousands of lives. Thousands of new beginnings. All stemming from an extraordinary archive - the passenger lists of ships that sailed to Britain from the Indian subcontinent from 1878 to 1960.

In a three-part series for BBC Two, Dr Yasmin Khan [a fellow of Kellogg College and an Associate Professor of British History based in the History Faculty and at the Department for Continuing Education]  uses the lists as her starting point to forensically piece together the lives of the some of the new arrivals who came to Britain from the Indian subcontinent between the 1930’s and 1960.

Painstakingly tracking down individual passengers and their descendants, she discovers how their untold stories shed light on our wider history, revealing how Britain changed them and how they changed Britain.

A Passage To Britain is a Wall To Wall production for BBC Two. The Executive Producer is Emily Shields and the Series Producer is Helen Nixon. It was commissioned by Patrick Holland, Controller, BBC Two and Tom McDonald, Head of Commissioning, Natural History and Specialist Factual. The BBC Commissioning Editor is Abigail Priddle.

'A Passage to Britain' will air on BBC Two every Tuesday for three weeks, starting with episode one 'The Viceroy of India' on 14 September at 21:00.