How much information could there even be for ‘The Dark Ages’?

Jennifer Coulton studied History at Hertford College and graduated in 2020. She was awarded the Joan Thirsk Prize for the best medieval thesis for her dissertation on early medieval burial positions. She studied at Oundle School, Northamptonshire before, and is now starting an MSt in Medieval Studies at Wolfson College, Oxford. 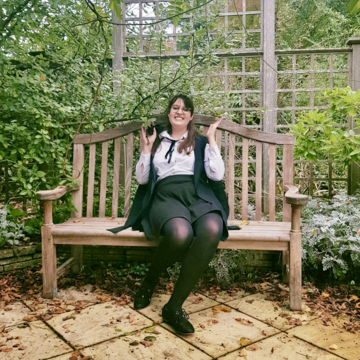 When I came to Oxford, I never expected to write a thesis on medieval history. My personal statement reveals a past self who fancied herself a modernist, interested especially in the two World Wars. My experience with medieval history had been some half-remembered year eight facts on 1066, maybe a smattering of Magna Carta, and something about the Yorkists and Lancastrians. I thought the medieval period was the ugly, half-formed predecessor to the Tudors, where Real History started.

So, when my college only offered medieval options for my first term, I shrugged and decided to get it out of the way. The History of the British Isles 400-1100? How much information could there even be for ‘The Dark Ages’? The most intensive eight weeks of my life later and I was a convert (and vowed to never use the term ‘The Dark Ages’ again).

For me, history has always been about people – their thoughts, their lives, their objects. When I started my degree, I was interested in how people of the past could be ‘just like us’. Yet what my undergrad study, especially on medieval history, showed me was how unlike us the peoples of the past were. I, for one, could never imagine speaking to Jesus as a plate of minced meat as Colette of Corbie did, or think it made perfect sense to lead a witch backwards to court. And yet, there was a method to the madness. When I learned a witch was an inverted ‘good’ woman, it then made sense to treat her in a ‘backwards’ manner. It dawned on me these seemingly impenetrable rituals actually had a thread of logic running through them. These were human emotions – fear, love, depression, desperation – in a language I was slowly learning how to read. And I loved it.

By my third year, I had dived head-first into medieval history but when it was time to find a thesis topic, I panicked. While my course mates planned to trawl through archives and documents, I didn’t have such a luxury unless I could suddenly become fluent in Latin and/or Old English. Besides, there isn’t exactly a plethora of documents to trawl through.

Finding a thesis topic was daunting – I wish I had known that the best thing to do at the time was explore, talk about my ideas, and reach out for help. I had done a paper offered by the School of Archaeology on early medieval England, and a side-effect was a newfound morbid curiosity concerning burials. I reached out to the tutors and lecturers of that course, and they encouraged me to turn to archaeological and visual materials, pointing me in the direction of current unanswered questions in my areas of interest. I cannot thank my supervisor, John Blair, enough for helping me find a topic, and for all the aid he provided throughout the process.

With this help, I narrowed down my thesis topic to the gestures sixth to eighth century English corpses were positioned in, comparing those gestures to artistic motifs to try and determine what was being expressed.

I thought such a niche topic would be fairly manageable, but my search for comparative material took me from Scandinavia to Byzantium, from eleventh century monks to Roman rhetoricians, from coinage to anthropology. However, through comparisons to both the artistic material and the demographics of the interred, I started to see trends. Among them, one trend started to become prevalent: mourning. As historians we are told to remain emotionally impartial. Yet realising that I was looking at historically-silent people voice their emotions was a feeling I have never felt before. Of course, I will never be completely sure if my interpretations and comparisons were correct. But, even glimpsing a form of logic in something that seemed random, in recognising a lost language, was the most intellectually satisfying experience of my life.

That is not to say that the thesis was always straightforward. I found myself lying on the floor with friends, partly from existential dread, partly trying to determine if a posture was ‘natural’ or deliberate. I panicked when I found a PhD dissertation that I thought covered everything I wanted to say. I now have a frankly worrying number of photos of skeletons on my phone. Yet, I wouldn’t change a thing.

For all current and future undergraduates, a final couple crumbs of wisdom. ‘Done and good-enough’ is better than ‘perfect, but unfinished’. You cannot talk about everything. Trust your supervisor. All the stress and pain is worth it.

Good luck, and enjoy it!