Lizzie Evens is from Baldock, Hertfordshire (where she attended a state comprehensive school) and studied History at New College. When Lizzie graduated in June 2017, Lizzie was awarded the Olwen Hufton Price for the best thesis in gender history. Lizzie’s thesis was supervised by historian of medicine Dr Anne Hanley and looked at early female physicians and their attitudes to abortion in late-nineteenth-century America.

Having only studied modern history at school, in my first year at Oxford I tried a lot of new subjects: medieval history, early modern history, European history, Byzantine history, and even a module on fairy tales and nationalism. I returned to the modern period in my second year, and pursued a module on America since 1866. This paper increased my appetite to learn more about modern America. While I have always been interested in gender and feminism, through trying different university modules I became increasingly drawn to historical medical and scientific spaces, people, and ideas. 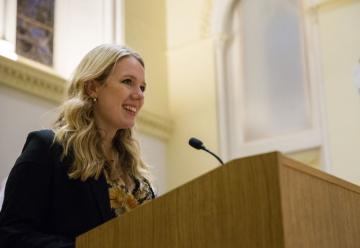 Having narrowed my focus to gender and medicine in nineteenth-century America, I spoke to my supervisor Dr Anne Hanley (a medicine historian in Britain). After a discussion, we decided I could use female physicians’ writings as a lens to consider medical ideas. From here, I began frantically googling. Sessions organised by the History faculty and my college highlighted academic search engines, which I could use to look for nineteenth-century primary material. After several days, I noticed the archive of the Woman’s Medical College of Pennsylvania, the first US women’s medical school, held a lot of interesting material. Additionally, many of the sources were digitised, which was perfect as a student working in the UK. Much of the material focused on how early women doctors justified their entrance into the profession: each year an influential faculty member made a speech to the graduating class. I was also interested in a collection of student theses. The handwritten extended essays were a requirement of graduation and served as a forum to apply academic ideas and lived experience to explore areas of contemporary medical interest. I found a number of theses that investigated abortion.

Abortion is a fraught issue today and at the fore of feminism since the 1970s, therefore I was interested in what nineteenth-century women thought of the topic. After reading existing work by historians, I discovered abortion was also at the fore of late nineteenth-century medical thought. I was surprised to learn that abortion was largely legal in the US in 1850, and became illegal by 1900. Other historians had demonstrated that male medical associations led this criminalisation process, in order to claim medical authority over homeopathic and ‘irregular’ practitioners, midwives, and women themselves. However, I was surprised that no historians had asked what women doctors thought of this process. Indeed, this question seemed particularly important as the process of criminalisation coincided with women’s entrance to the profession.

My supervisor Dr Hanley recommended scholarship on early female doctors in Britain and America, and we discussed how previous scholarship on early female physicians argued that they claimed their position as doctors by alleging a ‘special sympathy’ with their female patients: that they could better understand their problems, and offer moral guidance. Reading student’s writing about abortion in the context of the college’s public announcements, I found that these arguments made women doctors vulnerable to accusations of abortion; a crime male doctors and campaigners portrayed as a female conspiracy. Female physicians thus disavowed abortion, and rejected the practice, however in doing so they also expressed their self-identity, and perceived distance from other women. According to female doctors, they were unlike women who sought abortions: they were better educated, financially independent, willing to work hard (rather than avoid pregnancy to live a luxurious life of leisure), and defended maternity.

When I was researching my thesis, I contacted the archivists in Philadelphia to request further information about the material and the college. During this time, I discovered the Laidlaw Scholarship, a funding opportunity, offered by the Oxford Careers Service to finance an 8-week research project for undergraduate students. I decided to apply for the opportunity and contacted the archivists with the details, and to my delight they were excited to host me. I was fortunate enough to receive the scholarship and travel to Philadelphia (my first visit to the US.) These contacts and this research opportunity result from a couple of enquiry emails sent after googling sessions, and enabled me to extend my research questions (answered in a research poster here), access new material, and even travel to New York to look at additional archives in preparation for my Masters in US History.

This research trip directly led to my master’s essays, including one on Playboy in Medical School yearbooks, and to my thesis which looks at undercover female police officers investigating abortion in New York between 1914 and 1924. I plan to return to my undergraduate research and this new project in a PhD at University College London. My project,  ‘Not your Choice but Ours’, will consider anti-choice women when abortion was a crime.

Lizzie wrote an article for the blog, Nursing Clio. Her article looks at an 1893 Mock Trial at the Woman’s Medical College. The blog aims to connect history of women and healthcare to the present day. Some of Lizzie’s favourite pieces are a history of the cultural image of the hospital nursery window, a piece on the role of silence and noise in 1980s Aids activism, and a consideration of Shirley Chisolm, an African-American woman who ran for president in 1972.

If you would like to visit any museums that specialise in the history of medicine, have a look at The Hunterian Museum in London, the Wellcome Collection, and the Thackray Museum in Leeds.