Why study history at Oxford?

Jack Barber went to a comprehensive school in Suffolk, before coming to Magdalen College to study history. Three years after graduation, he tells us about his experiences at Oxford and beyond.

I applied to Oxford in a year that saw the Arab Spring, the assassination of Osama Bin Laden, and the London Riots. I chose to study History because I love following current affairs. In my school library, I enjoyed reading magazines like the Economist, New Statesman or Foreign Affairs, thinking about how particular moments might be remembered historically, and what they might suggest about the experiences, thoughts and emotions of the people involved. I was interested in why revolutions and uprisings start and spread, how international relations change over time, and how news stories reach varied audiences in different places. I thought history might provide me with an opportunity to think about these ideas.

History wasn’t an inevitable choice for me, though. Although I enjoyed studying about the Russian Revolution and the Weimar Republic at A-level, I felt I could be more creative in English Literature and more ideological in Politics. In English, I liked the challenge of finding hidden meanings in novels, and thinking about critical reception. In Politics, I enjoyed grappling with grand theories, and seeing how people tried to apply abstract concepts to real life. In particular, I liked reading political biographies, from Otto von Bismarck to Barack Obama, and thinking about how politician’s personal experiences affected their decision-making. History drew on the best of both these subjects. Most of all, I liked looking at evidence, forming a view and getting in to an argument. One teacher suggested I read law as I enjoyed public speaking. Instead, I opted for History because I felt I could combine all these skills into a degree that I would enjoy without narrowing my options too early.

In my first term at university, I remember my tutor telling me not to believe everything I read. This applies to stories about Oxford’s reputation. I was the first person in my family to apply to university, and I didn’t know many people who had gone to Oxford. I decided to apply after attending an open day at the History Faculty. The course looked challenging and I loved how the university is woven into the fabric of the city. The facilities and the opportunities on offer are unparalleled. 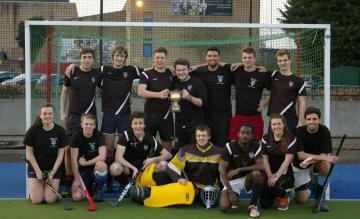 Jack Barber with his hockey team

You are not expected to be the ‘finished product’ at interview or on arrival. It helps if you have read the books on your personal statement, and if you can explain what interests you about the subject. This isn’t as hard as it seems. There are plenty of free online resources I used to clue up on how History as a discipline was developing. This also altered my own understanding of the subject beyond the A-level syllabus.

The best thing about the undergraduate History degree is the variety of expertise that is on your doorstep with the History faculty. Throughout my time I wrote essays on the Glorious Revolution, Algerian independence, post-war European cinema and the Peasants’ Revolt. The course structure pushed me out of my comfort zone, but the experience provided me with a broader and more varied historical understanding. It was sometimes difficult to go into a tutorial and be asked why I had dismissed a particular argument, when the person marking my essay had made it in the book that they had published on the subject.

One of the reasons Oxford has its reputation is because the workload means you have to learn how to compile lots of information into a coherent argument in a short period of time. This is initially daunting, but there’s always room to improve and you get lots of practice! Learning this skill gave me confidence to take on new challenges and get to grips with the key issues, and articulate them to others under pressure. This has been a vital aspect of my personal and professional development since taking up a History degree.

It doesn’t take long to work out that there’s something for everyone in the city. In my first year, I got involved in running events with the student committee in college. In my second year I edited an international relations journal, hosting diplomats and foreign affairs correspondents at speaker events. In my third year, I volunteered with a local social enterprise group. Each week, I played football and hockey for the college team. Don’t be shy about getting involved — a lack of ability can be more than compensated for by enthusiasm, as my college football career attests. Usually, people are just glad for an extra pair of helping hands. 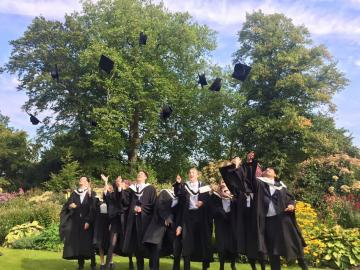 Jack Barber at his graduation

Terms are short and intense, and there’s not really an opportunity to work during them. I often used the vacations to earn some cash, and occasionally did jobs in Oxford to make the most of a quieter city. The vacations were also good for thinking about careers. While I was at Oxford, I used the careers service and applied to lots of different types of work experience. I spent a fortnight on the news desk of a national newspaper. One summer, I did a paid vacation scheme at a law firm. In another, I worked with the creative team at an international advertising agency.  There are lots of similar opportunities that arise throughout your degree, so I’d recommend keeping your options open and experimenting a bit.

Be prepared to change any life plan if the opportunity presents itself. When I finished my degree, I applied for an Oxford Graduate Bursary, which allowed me to stay on and complete a Master’s in British and European History. I never intended to do further study, but I enjoyed how the undergrad course became more sophisticated in third year, and I wanted to extend my thesis research.

When I left Oxford, I worked for a political communications company in London, and spent some time in Washington, D.C. working on aspects of the US election in 2016. My friends who studied History have gone into careers in journalism, law, theatre, education, consulting, and further study. I’m currently sitting a law conversion course, as I have decided to try and become a barrister. I want the intellectual challenge of building a coherent and sustained argument out of a mass of evidence, and then communicating it to others in court. On work experience with barristers, I’ve found myself being asked more about my undergraduate module on Cold War Culture than the law of Contract at times. A lot of lawyers I speak to followed a similar path, and some even continue to write history in their spare time.

History at Oxford encouraged me to think creatively, confidently encounter new and unfamiliar challenges, and question established concepts. These skills will hopefully stick with me for the rest of my career.

Jack’s decision to apply to Oxford to study history was influenced by his experience at the university open days. To find out more information on the open days held by Oxford, and what the faculty does during these days, visit here.

There’s a wide array of extra-curricular activities that students can pursue alongside their studies whilst at Oxford, as Jack mentioned. Students sign up to these during the Fresher’s Fair held in their first week at Oxford. Many societies have their own websites. For example, click here to find out more about the Oxford hub, which runs numerous social enterprises.

There is support to help you to study successfully