Howard Hotson - The Reformation of Common Learning: Post-Ramist Method and the Reception of the New Philosophy, 1618-1670 (OUP 2020) 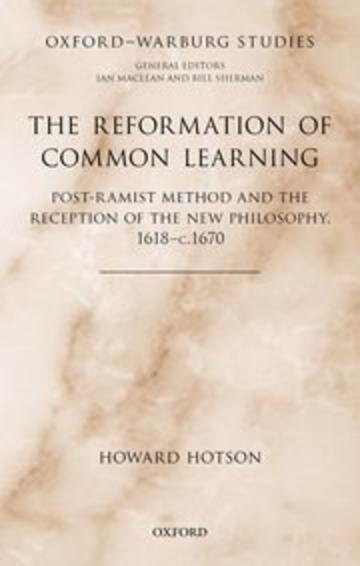 Ramism was the most innovative and disruptive educational reform movement to sweep through the international Protestant world in the latter sixteenth and early seventeenth centuries. During the 1620s, the Thirty Years' War destroyed the network of central European academies and universities which had generated most of this innovation. Students and teachers, fleeing the conflict in all directions, transplanted that tradition into many different geographical and cultural contexts in which it bore are wide variety of interrelated fruit. Within the Dutch Republic, post-Ramist method played a crucial role in the rapid assimilation of Cartesianism into a network of thriving young academies and universities. From England to east-central Europe, the tradition was no less important in accelerating the reception of Baconianism. In the easternmost outpost of the Reformed world in Transylvania, the displaced tradition generated a final flourishing of philosophical innovation which exercised a formative influence on the young Leibniz. The failure of all of these efforts to assemble the fruits of this tradition into an encyclopaedic synthesis marks a major watershed in Western intellectual history. The Reformation of Common Learning brings together all of these aspects of the tradition in a manner which roots them in deeper historical developments and relates a series of far-flung and poorly understood developments together in new ways.