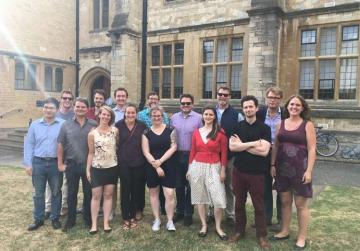 Over three weeks in July, we were two of three Oxford doctoral students to participate in the fifth annual Global Dome Exchange Programme. Run as a partnership between the universities of Oxford, Edinburgh, and Notre Dame, the programme has the slightly intimidating subtitle of ‘PhD Accelerator’. What this meant in practice was that, through a series of intensive and engaging seminars, thirteen doctoral students from English and History faculties had the opportunity to discuss and develop their projects with one another, as well as with nineteen guest faculty members, in order to ‘accelerate’ dissertation progress. The programme’s inter-disciplinary scope and convivial atmosphere combined to create a stimulating environment in which to make connections with other scholars and reflect on the wider relevance and significance of your research.

The programme took place in three different locations; starting in Edinburgh, it moved onto Notre Dame’s splendid London campus just off Trafalgar Square in London and finally onto Oxford. The main session of each working day of the programme was an intensive discussion of a student’s work. In the weeks leading up to the course, participants circulated the latest draft of a chapter of their thesis for pre-reading, and each one was then discussed in depth over the three weeks. When our papers were discussed, we were challenged to explain the broader ambitions and purpose of our projects: important questions that are often overlooked in the daily process of research. As a first year and a third year, we were at different stages in our research, but both found the process extremely useful. While the feedback on our work from such an interdisciplinary audience was invaluable, the process of giving feedback on others’ papers was equally rewarding. Each paper had a designated student ‘respondent’, whose job it was to think of questions that were at once pertinent and useful to the paper, but at the same time opened up wider discussion and feedback: focused on the author’s choices of structure, style and argument. We both enjoyed the process of carefully reading and commenting upon other people’s work and found it useful for thinking critically about our own writing in the following months.

Alongside these student presentations, the host universities also supplied the programme with speakers who discussed their latest research. These ranged from established academics to early career researchers who had just secured their first tenure-track post and book contract, with subject specialities ranging from twentieth-century multiethnic American literature to the political culture of later medieval England. Coming from Oxford, where we are lucky to have so many dedicated seminars based on geographic and temporal focuses, it was a refreshing change of pace to hear from academics from such a range. But one of the central mottos of the week was ‘No Inside Baseball’ – we had to go out of our comfort zone and think of big-picture questions. As a result, guest faculty speakers tended to focus on the process, rather than the content of their research: how they developed an initial idea into a viable research project, how to prepare your thesis into a publishable manuscript, and how to approach the job markets in the UK and USA.

While each working day was intense and gave each of us an intellectual workout, one of the major benefits of the Global Dome was the amount of down-time we had. We had our travel and accommodation generously covered by the scheme, as well as receiving a healthy stipend for the three weeks. This meant we were able to explore Edinburgh and London, and help forge lasting international friendships with our peers: we ate dinner at a restaurant where J. K. Rowling wrote Harry Potter, and toured the Houses of Parliament. If you occasionally feel the need to step back from your research and engage in more collaborative forms of intellectual activity, then the Global Dome Exchange Programme is for you. It is a rewarding and refreshing way to do something different at the end of the academic year and we would encourage you to apply. If you have any questions, please don’t hesitate to get in touch with either of us: matthew.ward@history.ox.ac.uk and william.clement@history.ox.ac.uk

This year’s meeting of the Global Dome PhD Accelerator will take place 1-12 July 2018.

An initial meeting for anyone interested in coming along will take place at 4.00 pm on Tuesday 27 February at the King’s Arms.

Study something in depth that truly inspires you

Commemorating One Hundred Years of Degrees for Women

A route to discover Jewish Palaces, Villas, and Country Houses

There is no one kind of Historian