Sarah Large is a first-year student studying History at Magdalen College. She studied at a State Comprehensive school in Nottingham for both her GCSEs and A-Levels and is a first-generation university student. 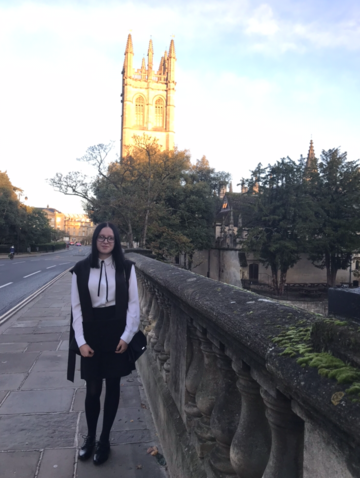 I applied to Oxford University because I felt like I had nothing to lose. Taking up one out of my five choices on UCAS didn’t seem like much of a risk. I knew that I loved the course and the college, but I wasn’t optimistic that I would be offered a place. I wasn’t confident that I was the type of person that Oxford would be looking for and despite my grades, I felt as if there were others out there that would be better than me and would deserve a place more.

When I was contacted and told I would be going down to Oxford to be interviewed I felt very nervous. I wasn’t sure what to expect and felt that I would meet other applicants there and realise that I was completely different to them. My fears proved to be unfounded and I had a great time and met some really great people. The experience made me want to come to Oxford even more and made me realise I could actually see myself studying there. I was ecstatic when I received an offer.

Looking back at these concerns now that I am in my last term of my first year, I now realise that I couldn’t have been more wrong. Magdalen has been such a welcoming and diverse place. I’ve met some great friends and there hasn’t been anyone that I’ve felt has looked down on me because I’m not from a particular background. The community that comes with being a member of an Oxford college is really amazing. The support they offer you (both with your academics and your mental health) is great too.

On the academic front, I feel as if Oxford has really made me even more passionate about History. Being surrounded by people that feel the same makes for some great conversations. I don’t feel as if I’m competing against anyone or as if I’m not as good as other people. I think being able to learn from other people and them learning from you is a really great part of studying at Oxford. You can bounce off of each other and build each other up. It’s more like comradery than competition.

I’m not going to lie and say my experience at Oxford has been always positive. I haven’t always had much confidence in my academic ability. The work can get overwhelming at times and finding my feet was really hard for me in freshers’ week. However, as I got used to academic life and met some great friends Oxford turned into the best experience of my life.

Now that I’m studying at Oxford I just want to encourage anyone who is thinking that it isn’t the place for them to take the opportunity to apply.  If you don’t end up getting an offer it is still a great experience applying (plus at interview the free food is great). And if you do, studying at Oxford is a great opportunity and a great place for anyone.

If you take anything from this, just remember that the tutors at Oxford see the potential in you even if you may not see it yourself. It’s not where you come from but the passion you have for your subject and your academic ability.