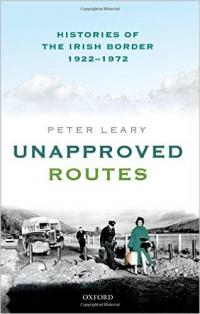 In awarding the prize, the ACIS Prize Committee commented:

‘Peter Leary’s Unapproved Routes is a timely and sensitive exploration of everyday life on the Irish border in the half century between 1922 and 1972. This conceptually sophisticated book deftly marries historical and anthropological analysis to critical theory, examining such diverse subjects as salmon fishing, cockfighting, smuggling, and border-crossing roads in order to reveal the ways in which the border simultaneously reified state power and exposed its limits. Leary’s empathetic study of Irish people on the periphery–both spatially and socially–-demonstrates that Partition opened as well as closed opportunities for marginalized groups on either side of the divide. It reminds us, too, that the relationship between official rhetoric, public policy, national identity, and lived experience is complex and contested. The committee is delighted to award Unapproved Routes the Donald Murphy Prize for Distinguished First Book.’

Unapproved Routes has also been shortlisted for the Royal Historical Society Whitfield Prize for best first book on a British or Irish history subject.