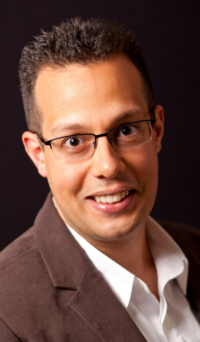 Dr John-Paul Ghobrial, an Associate Professor in the Faculty of History, has received a €2 million ERC grant for his research.

The grant will go towards his project, called 'Moving Stories: Sectarianisms in the Global Middle East'. This is Dr Ghobrial's second ERC grant - he previously held an ERC Starting Grant for his project 'Stories of Survival: Recovering the Connected Histories of Eastern Christianity in the Early Modern World' from 2015 to 2020.

He said: "I am very grateful to the ERC for this opportunity to bring together a community of scholars in Oxford with shared interests in storytelling, sectarianism and mobility in the twentieth-century Middle East. These European awards make it possible to study the past in exciting ways, and Oxford is a fantastic place for this sort of collaborative research that connects postholders, students, and early career researchers."

About ‘Moving Stories: Sectarianisms in the Global Middle East’

The emergence of sectarianism forms a key element of the impact of modernization and globalization on Middle Eastern history. Yet we still lack a full picture of how new forms of sectarianism developed within the region, and in exile, and how these sectarianisms became such a powerful force in the volatile history of a decolonizing Middle East. The Moving Stories project concentrates on two areas of research. First, the project will explore the global circulation of Middle Eastern sectarianism and the variety of sectarianisms that developed in specific localities across the Middle East, the Americas, and Europe. Second, the project will focus on what it calls the ‘moving stories’, or emotive forms of storytelling, used by individuals to describe, explain, and represent sectarianism as much to themselves as to multiple publics in local, national, and international contexts.  At the heart of the project lies an activist strategy of outreach aimed at identifying sources that remain even now hidden away in private, family, and communal archives. Using these sources, the project will reconstitute an ‘Archive of Sectarianism’ spanning four continents, more than half a dozen Middle Eastern and Western languages, and a wide variety of records, documents, and literary sources from the 18th to the 20th twentieth century. The project’s main objective is to write a global history of sectarianism that pays as much attention to the microhistories of individuals and communities as it does to macro narratives of political, social, and religious change. Looking beyond the Middle East, however, the project will also provide a model for understanding how other modern forms of sectarianism have developed through complex shifts in identity in which émigré and diaspora communities have often played a formative role. In this way, the project will open avenues for future research into the comparative study of sectarianism among historians, social scientists, and literary scholars.