DPhil Student Eamonn O'Keeffe talks to Kate Winslet about her family history in upcoming 'Who do You Think You Are?' 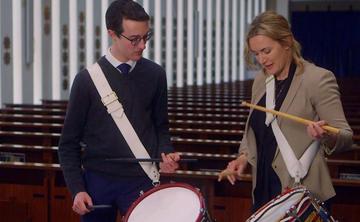 Eamonn O'Keeffe, first-year DPhil student at Merton College, will be appearing on Who Do You Think You Are? with Kate Winslet on Monday 12 August.

O'Keeffe, who researches British military musicians during the French Revolutionary and Napoleonic Wars was contacted by Who Do You Think You Are? researchers last autumn in order to help guide their enquiries, sharing elements of his research on the experiences and duties of drummers during the Napoleonic Wars.

"I spent a day in late May filming with Oscar-winning actress Kate Winslet for the Who Do You Think You Are? documentary at Wellington Barracks near Buckingham Palace. I talked Kate through historical records of her great-great-great-grandfather's service as a drummer in the early-nineteenth-century British Army. I explained to Kate that sound was essential to military discipline and communication: drummers instructed soldiers when to rise, eat, work and sleep through a series of musical commands known as duty calls. Besides regulating daily life in the army, drummers enlivened martial ceremonies, enhanced morale and accompanied recruiting parties to encourage enlistment." O'Keeffe said.

"I also explained that military drummers and bandsmen routinely performed for civilian audiences, providing sought-after professional entertainment in garrison towns while broadcasting and amplifying wartime expressions of patriotism. Kate and I discussed her ancestor's participation in Changing of the Guard ceremonies in central London - a premiere attraction for locals and tourists 200 years ago just as it is today. I explained to Kate that mass mobilization during the French Revolutionary and Napoleonic Wars expanded opportunities for ordinary men and boys to acquire musical skills while offering all levels of society greater access to instrumental entertainment.

I then demonstrated to Kate some of the duty calls that her ancestor would have played to transmit orders and structure daily life in the army, teaching her to perform several rudiments on the drum. She was a fast learner!"

Watch Who Do You Think You Are? with Kate Winslet on Monday 12 August on BBC One at 9pm.

A clip of the episode can be seen here.