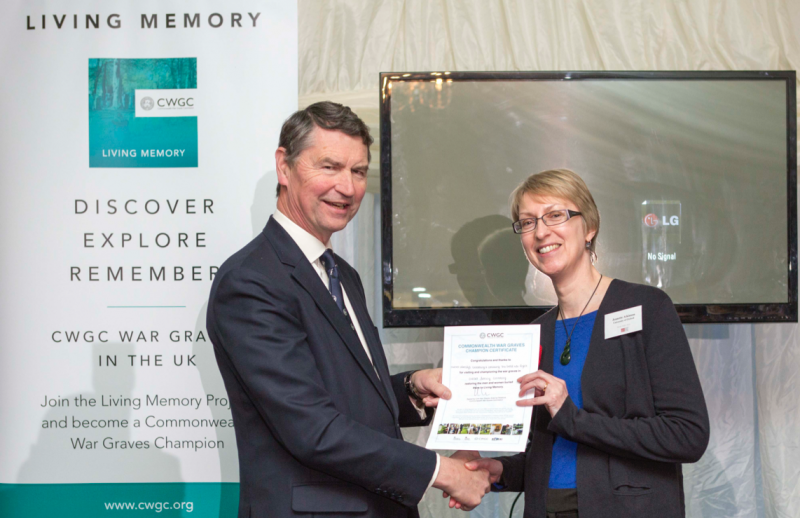 From 1 July to 18 November 2016, the Commonwealth War Graves Commission (CWGC) commemorated the centenary of the 1916 Battle of the Somme through their Living Memory project. This aimed to highlight and raise awareness of Commonwealth war graves across the UK over the 141-day commemoration. As part of the project, the History Faculty based Globalising and Localising the Great War (GLGW) research network focused on bringing together the global and local aspects of the First World War – New Zealand and Oxford hospitals – in a large public engagement event, which took place at Botley Cemetery and Botley Women’s Institute on 8 October 2016. An audience of nearly 200 New Zealanders, including the High Commissioner for New Zealand, local Oxford residents, military dignitaries and members of the University gathered to pay their respects to the nine First World War New Zealand soldiers buried at Botley Cemetery (for a full report on the Botley event, please see The Oxford Historian, Electronic Edition Volume 1, pp10-13).

On 18 November, community representatives from many of the Living Memory projects across the UK assembled at Brookwood Cemetery, Surrey, to commemorate the final day of the Battle of the Somme. Starting with a tour of the cemetery, led by Glenn Hearnden, representatives then moved to the Canada building for refreshments and an opportunity to view some of the exhibitions on show, including the one produced by GLGW. After an opening performance by Chepstow Singing Club, Victoria Wallace, Director General of the CWGC formally welcomed guests. Colin Kerr, CWGC Director of External Relations and Glyn Prysor, CWGC Historian gave talks on the projects and this was followed by Virginia Crompton of the Big Ideas Company, who interviewed several community representatives. During the interviews, photographs from each of the projects were screened on a large display.

Vice Admiral Sir Tim Laurence KCVO, CB, ADC(P), Vice Chairman of the CWGC, gave a closing statement before presenting certificates to community representatives. Finally, everyone was led outside by a piper from the Royal Scottish Pipe Band Association Northern Ireland, who play the Living Memory lament during the lantern laying at the 14-18 Memorial. Chris Shaw, Shorncliffe Trust then read ‘A Perfect Day’ by Private Henry Smith and this was followed by a further performance by the Chepstow Singing Club. The event concluded with the Last Post and two minutes silence.