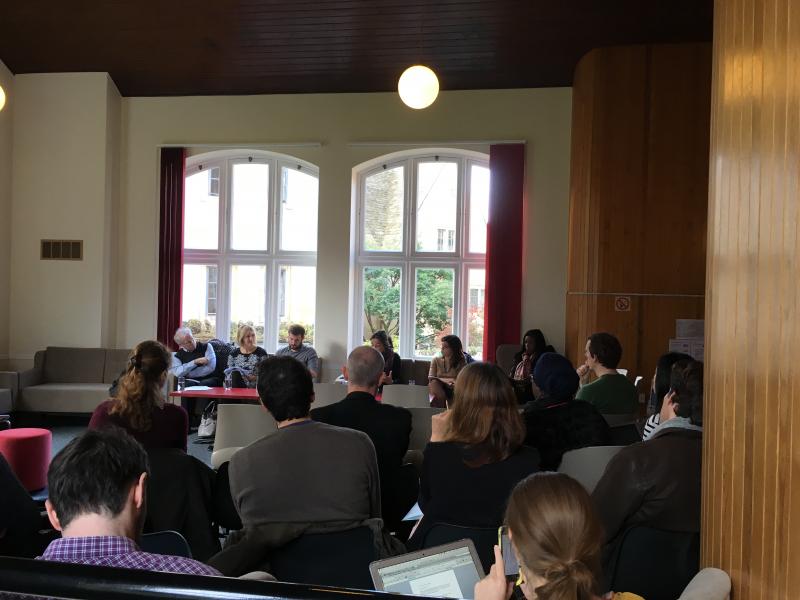 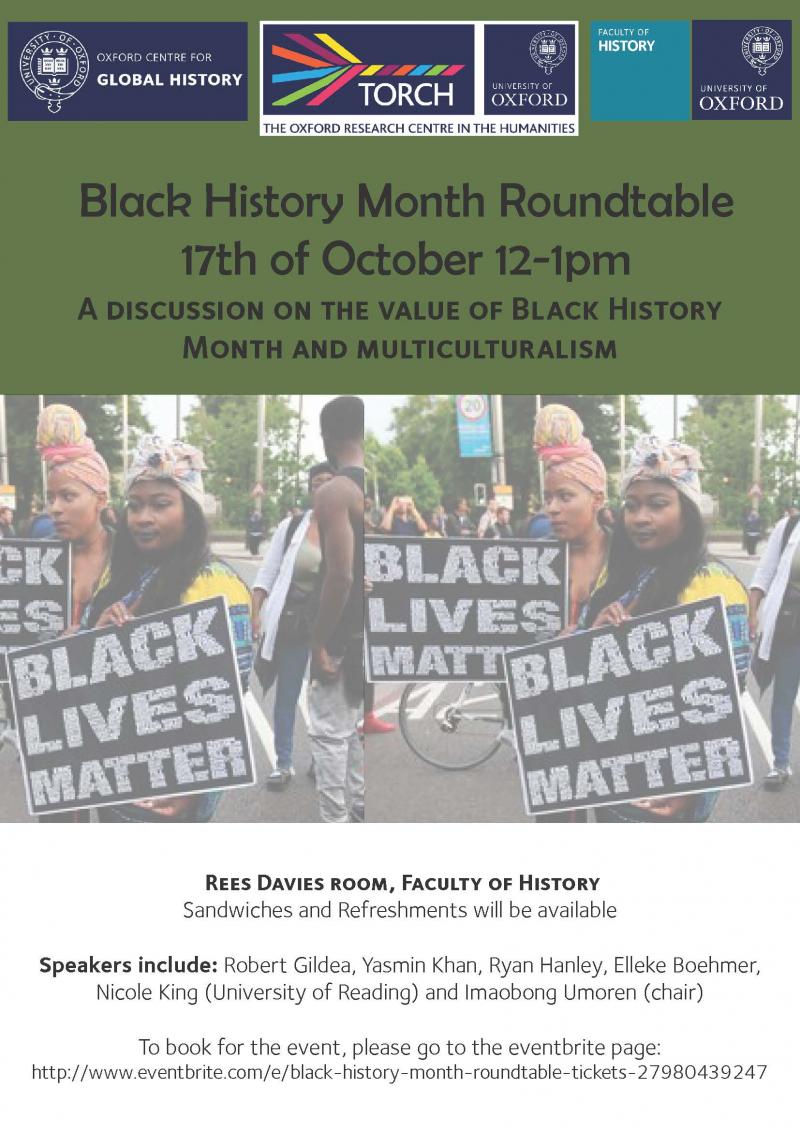 On Monday 17th October the Oxford Faculty of History hosted its first ever Black History Month Roundtable. This groundbreaking event was co-sponsored by the Oxford Centre for Global History and the Race and Resistance Programme at TORCH.

Imaobong Umoren, the chair of the roundtable, prefaced the discussion by highlighting the contemporary context of celebrating Black History Month in the year of 2016. Between Brexit, the Middle East Refugee crisis, the U.S. presidential election, the Rhodes Must Fall movement, and the Black Lives Matter movement, 2016 is a year defined by both a rise in racial tensions in Europe and the United States and by the continued activism by minority groups to push back against these rising tides of discrimination.

The members of the BHM roundtable vigorously discussed both the contemporary relevance of celebrating black history and the many persistent challenges faced by academics, educators and activists in their efforts to both preserve and perpetuate the enduring struggles for minority equality.

Nicole King, a Lecturer in English Literature at the University of Reading, started the discussion by describing both the value and limitations of Black History Month. She spoke about the issues of teaching incoming postsecondary students possessing an often static view of black history and static understanding of the concept of ‘blackness.’ She also emphasized the urgency of having new students and experts in the field of African American History.

Yasmin Khan, a Lecturer in British History at Oxford, historicized Black History Month, discussing its first celebration in Kent State University in 1969 and the activism in London that led to the first Black History Month in the United Kingdom in 1987. Kahn then cited the current struggle to retain the gains made during the Civil Rights Era and the significance of Black History Month as a platform from which those accomplishments could continue to be celebrated.

Elleke Boehmer, Professor of World Literature in English at Oxford, noted the value of Black History Month in raising awareness of the struggles faced by minorities, but challenged the notion that the study of black history should be limited to one month of the year. Her critique was paired with a corollary describing a range of new topics, technologies, and ideas that scholars, students and activists could harness to remedy the current limitations of Black History Month.

The next speaker, Robert Gildea, a Professor of Modern History at Oxford, called the audience’s attention to the rising tide of antagonism against multiculturalism in the United Kingdom and the historical precedent of similar waves of opposition. Gildea cited quotes from public officials and institutions, ranging from Winston Churchill to the Daily Mail. The quotes selected by Gildea highlighted past and contemporary sentiments of British exceptionalism and fears about the perceived loss of traditional values to immigrant cultures.

The final speaker, Ryan Hanley, a Junior Research Fellow at New College, addressed a number of institutional issues pertaining to black history: underfunding of academic posts and projects, disinterest in black history by black students and the lack of black intellectuals holding academic posts. Hanley concluded the roundtable on a positive note, arguing that black history is vital to understanding of our shared history.

Questions and comments from the audience corresponded with the key issues and themes addressed by the speakers. The audience and panel members discussed institutional attitudes towards African Studies at the University of Oxford, how to approach white audiences when discussing difficult subjects such as race and colonialism,  and means by which the temporal and structural limitations of Black History Month could be remedied.

The viewpoints expressed in Voices Across Borders are those of the individual contributors and do not necessarily represent the views of the University of Oxford.

Race and Resistance across Borders in the Long Twentieth Century
Evan Matsuyama is a DPhil student researching for a thesis on Japanese ethics and culture in the 20th-century advancement of Asian American civil liberties.