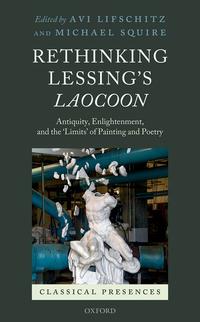 Gotthold Ephraim Lessing first published Laokoon, oder über die Grenzen der Mahlerey und Poesie (Laocoon, or on the Limits of Painting and Poetry) in 1766. Over the last 250 years, Lessing's essay has exerted an incalculable influence on western critical thinking. Not only has it directed the history of post-Enlightenment aesthetics, it has also shaped the very practices of 'poetry' and 'painting' in a myriad of different ways.

In this anthology of specially commissioned chapters - comprising the first ever edited book on the Laocoon in English - a range of leading critical voices has been brought together to reassess Lessing's essay on its 250th anniversary. Combining perspectives from multiple disciplines (including classics, intellectual history, philosophy, aesthetics, media studies, comparative literature, and art history), the book explores the Laocoonfrom a plethora of critical angles. Chapters discuss Lessing's interpretation of ancient art and poetry, the cultural backdrops of the eighteenth century, and the validity of the Laocoon's observations in the fields of aesthetics, semiotics, and philosophy. The volume shows how the Laocoon exploits Greek and Roman models to sketch the proper spatial and temporal 'limits' (Grenzen) of what Lessing called 'poetry' and 'painting'; at the same time it demonstrates how Lessing's essay is embedded within Enlightenment theories of art, perception, and historical interpretation, as well as within nascent eighteenth-century ideas about the 'scientific' study of Classical antiquity (Altertumswissenschaft). To engage critically with the Laocoon, and to make sense of its legacy over the last 250 years, consequently involves excavating various 'classical presences': by looking back to the Graeco-Roman past, the volume demonstrates, Lessing forged a whole new tradition of modern aesthetics.

Ben Jackson - The Case for Scottish Independence: A History of Nationalist Political Thought in Modern Scotland (2020)