An Unnerving Attraction to Vellum Manuscripts

I was really proud to have produced my own piece of original research when it was finished.

Asa Kerr-Davis studied History at Jesus College and graduated with a first in 2019. He was awarded the Joan Thirsk Prize for the best medieval history thesis for his dissertation about the strategies used by deponents appearing before the medieval inquisition in the 1280s. He attended Tunbridge Wells Grammar School for Boys, a state grammar, before coming to Oxford and has just completed an MSc conversion in the Psychology of Mental Health at the University of Edinburgh. 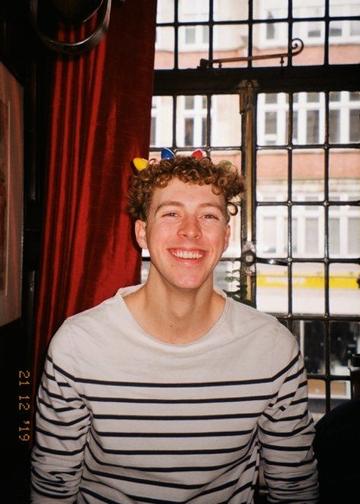 Before coming to Oxford, I had never studied medieval history. After a dry A-level in Modern History, containing borderline-nonsensical enigmas like ‘Did Britain win the War or did Germany lose?’, I wanted to learn about parts of the past which aren’t writ large in modern memory. Soon after arriving at Jesus College I realised that I had several of the requisite characteristics of a medievalist: an insatiable urge to argue with everyone; an unnerving attraction to vellum manuscripts; and an unjustifiable enthusiasm for ritual sacrifice (I’m still hoping for a Netflix true-crime documentary).

In the summer term (‘Trinity’) of my first year, I chose an optional paper about Crime and Punishment in Medieval England taught by Professor Ian Forrest, which compounded my interest in medieval legal and social history. Our weekly reading lists included original court rolls from the Bodleian library’s extensive collection, which I found fascinating. One memorable instance of 15th-century vigilante justice sticks in my mind: a man accused of stealing geese was ‘tarred and feathered’ and marched through the nearby town (dress like the goose you want, not the one you have). The voices of witnesses, preserved in ink on medieval court rolls, exist nowhere else in the historical record.

After studying papers in second year about medieval Britain (600-1086) and the early Italian Renaissance (1200-1350), I decided to write a thesis on medieval social history using legal documents. I met with Ian Forrest again to discuss possible topics. The thesis focuses on primary source material, so my inability to read any Latin (and refusal to download Duolingo) was an immediate obstacle. But when I mentioned I had A-Level French, Ian suggested I could research the medieval inquisition against Catharism in the Languedoc region of southern France. I discovered a recent 1000-page dual-translation edition of inquisitorial records from the 1270s and borrowed the History Faculty Library’s copy from the Radcliffe Camera.

A cursory Wikipedia informed me that the Cathars were a medieval heretical group who believed God had two opposing aspects – good and evil. After a believer underwent ritual purification (consolamentum) to become a ‘Good Man’ or ‘Good Woman’, they refused food and water until they starved to death (endura). Despite an attempt in the early 13th century to exterminate Cathars (the Albigensian Crusade), some illicit networks of Cathars survived. A fierce effort to root out this heresy by papal inquisition was launched in the 1240s, and the early 1270s saw the inquisitorial project renewed.

I began reading the sources with an open mind. Initially, I planned to write about the secret oral networks maintained by Cathars, but I soon became more interested in the nature of the records themselves. Were they ‘medieval tape recorders’ transparently recording the words of peasants, as Emmanuel LeRoy Ladurie suggested? Scholars like John Arnold, drawing on Foucauldian thought, disagreed. In his view, inquisitorial registers manipulated witness testimony into a function of inquisitorial discourse, using technologies like meticulously cross-referenced archives to ‘catch a peasant by the tongue’ (an admittedly odd image). I examined the plurality of voices layered in the text: the accused, the deponent, the inquisitor, and the translator. Although Arnold declared the pursuit of the ‘authentic voice’ of the deponent an impossible task, it seemed evident that deponents exercised agency to cast themselves as innocent bystanders, ignorant of heresy.

I decided to explore the strategies used by deponents to construct favourable subjectivities. Some performatively collaborated by reporting alleged heretical behaviour. Pacts of confidentiality were breached to tell the inquisitors secrets and lay the foundations of new bonds of trust with the inquisition. In a few cases, deponents described relations between others in an ‘ethnographic’ manner: constructing carefully curated fields of knowledge about heresy by reporting eavesdropped conversations. After reporting conversations overheard through a keyhole, one symbolically described himself as a man who ‘kept to the road which borders the wood’.

These strategies were sometimes far from eloquent, especially when deponents attempted to mitigate self-incrimination. One man, accused of making heretical comments, claimed they were just controversial jokes made in pubs after a few jars of wine. Another, accused of urinating in a cemetery, blamed a medical infirmity – ‘he cannot hold his urine’ – to avert the inquisitorial gaze. Re-discovering the worlds of marginalised lay people was a fantastic process which illuminated the perspectives of a highly persecuted community in the medieval world.

I greatly enjoyed writing the thesis, but it wasn’t without its challenges. I wrote my first draft in a couple of weeks, working into the night under the fluorescent white light of a Wi-Fi blackspot in the Jesus library (‘The Cave’). I remember waking up more than once in the middle of the night and grabbing my phone to type some notes because I had literally been dreaming about the Cathars (Oxford history is a #lifestyle). But I was really proud to have produced my own piece of original research when it was finished.

I’m very grateful to Ian Forrest for his supervision and guidance throughout the thesis process; I immensely enjoyed the regular opportunities to discuss and refine my ideas. Alongside my studies, I played football for Jesus and the University 2nd XI, which were huge highlights every week. I was also the Men’s Welfare Officer on the Jesus College JCR Committee, which connected me with the college community and set me on my career path towards mental health services.