2020 marks the centenary of the formal admission of women to the University of Oxford, one-hundred years since women were granted the right to matriculate and therefore to take degrees. Vera Brittain, who matriculated in 1920, described the atmosphere in the Sheldonian when women were first admitted to degrees as ‘tense with the consciousness of a dream fulfilled.’ [1] The Principal of St Hugh’s, Eleanor Jourdain, recalled it as ‘a woman’s day, and a day for women to remember’. [2]

Despite the significance of this landmark year, women had studied at the University of Oxford long before 1920. In fact, they had been making their mark on the University and advocating for women’s access to an Oxford education since the 1860s. The Delegacy of Local Examinations opened local exams to schoolgirls in 1870 (after refusing to do so in 1862 and 1866), but higher local examinations were not open to women over the age of eighteen until 1875. By this time, a successful lecture scheme for women was available, having been founded in 1873.

‘Lectures for Ladies’, as the scheme became known, was convened by an informal committee of dons’ wives and sisters which included Mary Humphry Ward, Louise Creighton, Charlotte Green and Bertha Johnson. The reform-minded women secured prominent scholars including Arthur Johnson, Mark Pattison and William Sedgewick to deliver lectures to a number of interested women.[3] The scheme continued for six years, with lectures taking place in a room in the Clarendon Building. 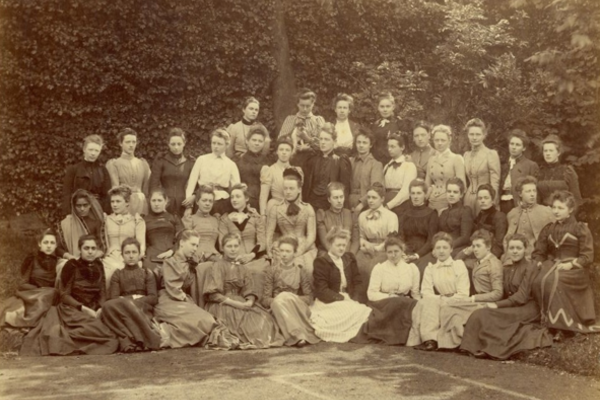 The foundation of the women’s halls

These informal lectures for women were part of a nationwide movement for women’s access to higher education, and helped stimulate serious discussion in Oxford about establishing a small hall of residence for women. After all, Girton College had opened in 1869 and the entrance of women into an all-male Cambridge environment suggested that successful integration was possible.[4] In fact, it was after a visit to Girton in 1878, that Edward Talbot (Warden of Keble) and Lavinia Talbot, chaired a meeting in Keble College, on the 4 June 1878, where it was decided that an Anglican women’s hall of residence should be established in Oxford.[5] Oxford’s first women’s higher education institution was named Lady Margaret Hall (after Lady Margaret Beaufort) and its first Principal was Elizabeth Wordsworth. While LMH was founded in 1878, it opened in October 1879 in Norham Gardens with just nine students. At the same time, Somerville Hall (named after the mathematician, Mary Somerville) was established as a non-denominational institution. Somerville opened on the Woodstock Road with twelve students, under the leadership of its Principal, Madeleine Shaw Lefevre.

Somerville Hall and LMH operated for many years as residential halls. Educational provision for their students was organised by a separate, centralised organisation established in June 1878, the Association for Promoting the Higher Education of Women (more commonly known as the AEW). While the AEW had no legal or statutory status in relation to the University, the institution collected fees for lectures, organised tutorials and lectures, hired tutors and enforced various rules and regulations. While the Association’s centralised role in providing tutors was soon challenged by women’s societies such as Somerville, which proposed employing its own residential Tutors, the AEW remained an important link between the women’s Halls and the wider University.[6] The AEW was also the parent-body which oversaw the Oxford Home-Students, the name given to women students residing in family homes or as lodgers in the homes of ‘hostesses’ in Oxford, rather than in halls. In 1879, The Society for Oxford Home-Students (formally named as such in 1898) had twenty-five women students who were welcomed under the supervision of the Lady Secretary of the AEW. Initially, this was Charlotte Green, who was followed by Bertha Johnson in 1893. The Society for Oxford Home-Students would eventually become what we know today as St Anne’s College.

By 1893, two further women’s halls had been established. St Hugh’s Hall was founded in 1886 by Elizabeth Wordsworth as an institution for women who couldn’t afford the fees at LMH and Somerville. St Hugh’s (named after St Hugh of Avalon) offered lower fees, with economy being achieved by frugal living and smaller accommodation. Charlotte (Annie) Moberly was St Hugh’s first Principal and she opened the Hall with just four students. St Hugh’s was followed by St Hilda’s Hall. St Hilda’s (named after St Hilda, head of Whitby Abbey) was founded by the Principal of Cheltenham Ladies College, Dorothea Beale, with the primary intention of housing pupils from Cheltenham Ladies College. Beale appointed Esther Burrows as the first Principal of the Hall, which opened with seven students in 1893. 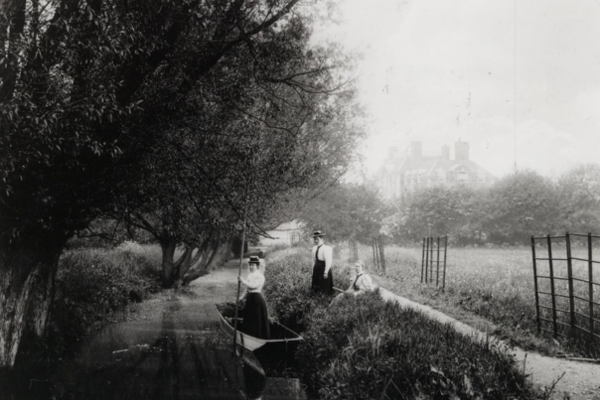 The move for women’s degrees

As the women’s halls and societies developed and expanded, the question of opening degrees for women began to surface. This, in tandem with the recommendation by a Royal Commission that Scottish universities should open their degrees to women, meant that by 1895 Oxford and Cambridge were the only British universities to deny women degrees. Women were allowed to take all the examinations leading to the BA degree at Oxford, but while they laboured under almost the same conditions as the men, they had little to show for their efforts by the time they left the University. Consequently, pro and anti-degree debates ensued and the Hebdomadal Council was petitioned by educational reformers and members of the University who demanded that women receive recognition for their efforts. All petitions and proposed resolutions to the University statutes were denied in the first move for degrees in 1896. Women continued to be regarded at best as ‘honoured guests’ in a university which remained unsure about their status.[7]

A Delegacy for Women Students was established in November 1910, marking a new and important phase of the campaign for women’s education in Oxford. It had been prompted by H.T Gerrans’s (Secretary of the Oxford Delegacy for Local Examinations and Tutor of Maths at Worcester College) suggestion to the Hebdomadal Council that women should be recognised as members of the University and that the university should itself formally assume supervision and control of them. The University’s formal approval of the Delegacy for Women Students was a huge step towards women’s full membership of the University, not least because the statute which established the Delegacy acknowledged women as University members for the first time. In November 1910, a writer to The Times reflected on women’s progress, stating:

‘Oxford has recognised that she has daughters, and some day she will give to them, as to her sons, the right to bear her name and wear her gown’.[8] 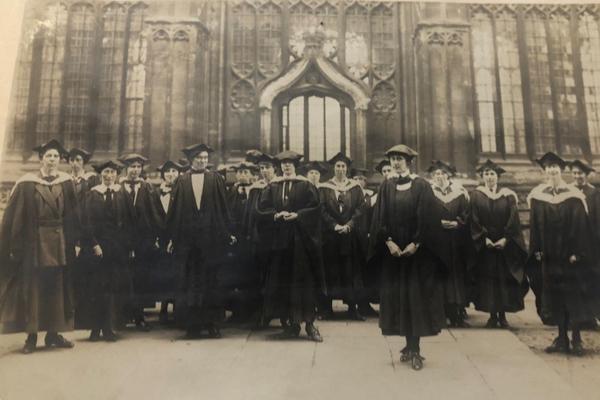 Nonetheless, it took another ten years for women to be recognised as full members of the University as it wasn’t until October 1920, that women matriculated and were awarded degrees for the first time. On 7 October 1920, the matriculation of the first 130 women students took place in the Divinity School. A report of the day in the Oxford Times recalled that ‘the Divinity School was alive with trim figures in cap and gown in various stages of excitement, all carrying the University statute book under their arms and all proud of their newly-won distinction’.[9]  Speaking directly to her students outside the Divinity School, the Principal of LMH, Henrietta Jex Blake, proclaimed ‘this is the proudest day of my life - you are historic characters - the first women ever matriculated in this leading university of the world’.[10]

The first degree ceremony followed at the Sheldonian Theatre on 14 October 1920. Among those who received their degrees on this date were the Principals of the women’s colleges, former students, women tutors and administrators, and women prominent in the educational and reform movements in the nineteenth and twentieth centuries. During 1920 and 1921, a total of 1159 women matriculated. Eleanor Lodge summarised the feeling of many of these women:

‘Only those who have lived by the University but not of it, who have done University work but without being university members, can fully appreciate the vast difference it makes to be now at last part of the great institution, which has been so long the home of students and scholars’.[11]

While 1920 was a momentous landmark in the history of women’s education in Oxford, it was not until 1957 that the quotas restricting the number of women undergraduates were finally removed. Likewise, it was only in 1959 that the five women’s colleges received the same ‘full status’ as the men’s colleges, and their Heads became eligible to become Vice-Chancellor. In 1961, Lucy Sutherland became the first woman Pro-Vice-Chancellor and the Oxford Union extended full membership to women. Yet, it took until 2015 for Professor Louise Richardson to become the first woman in the history of the University to become Vice-Chancellor. She became the 272nd VC, breaking an eight hundred year pattern of male leadership.

[3] Brittain, The Women at Oxford, 44-46. Judy Batson, Her Oxford, 19. Please note that a similar scheme was established by Eleanor Smith in 1866 but this was less successful due to a lack of support from male dons and a limited number of women at Oxford during this period. An influx of women didn’t occur until 1871 when the University Test Act permitted married men to become college Fellows. 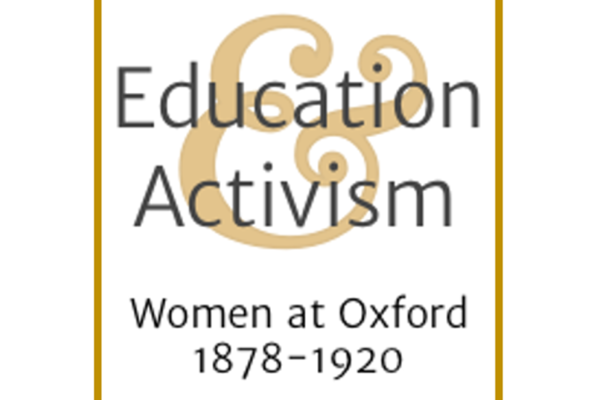 This website features a digital library of thousands of documents and images, including a wide range of original documents, of women who attended the University of Oxford between 1878 and 1920.