A route to discover Jewish Palaces, Villas, and Country Houses 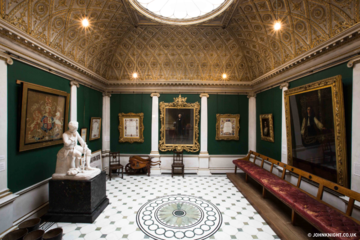 Salomons Museum By permission of the Salomons Estate.

September 6th 2020 will see the launch of a new online heritage route, for armchair travellers and inquisitive tourists alike. The route has been developed by Oxford’s Jewish Country Houses Project as part of the new European Routes of Jewish Heritage, which are managed by the AEPJ and accredited by the Cultural Routes Programme of the Council of Europe.

Much of Jewish history is rooted in Europe, with a past made up of migration, persecutions and precariousness, but also of exchanges, humanism and a profusion of mutual enrichment. A key aspect of the European Jewish routes is accordingly their recognition of the essential contribution made by the Jewish tradition in building cultural diversity through intense intercultural dialogue.

The ‘Palaces, Villas and Country Houses’ route brings together 16 properties in six countries. It offers a spectacular variety - from the French Renaissance château style of Waddesdon Manor in England, to Max Liebermann’s lakeside villa in Berlin-Wannsee, and the monument of modern architecture that is the Villa Tugendhat in Brno, Czech Republic.

Some of these historic houses are presenting their Jewish heritage to visitors for the first time; others are finding connections through the Jewish Country Houses project that will bring an even richer experience to the visitor.

Antisemitism and the difficulty of telling Jewish stories in places far from established centres of Jewish life have emerged as common preoccupations – as is a sense that Jewishness is everywhere and nowhere in houses whose owners belonged to high society even if they were also key figures in the world of Jewish philanthropy. Yet it has become clear that these houses represent a genuinely European – and Jewish – heritage, which the nationalisation of memory culture has tended to obscure. The “Palaces, Villas and Country Houses” route is one way of articulating this complex, European story and expanding our understanding of Jewish heritage beyond the conventional triad of synagogue, cemetery and ghetto.

The European Routes of Jewish Heritage launch on September 6th to mark the opening of this year’s European Days of Jewish Culture. New material will be uploaded all that week. Now is a difficult time to visit, but it may be the perfect moment to learn more about these properties and the people who lived in them.

Ireland, Empire and the Early Modern World: this year's Ford Lectures to start on Friday

Erica Charters in conversation with Zoltán Molnár: A History of Medicine perspective on Thomas Willis