In June last year, I had an email from Claire Breay, Head of Ancient, Medieval and Early Modern Manuscripts at the British Library, asking if I would be willing to film a short video for the Anglo-Saxon Kingdoms exhibition that was about to open. I don’t usually jump at such chances – the risk of making a public fool of myself tends to outweigh my love of an audience – but I knew this was going to be something special. And so I filmed a short segment and had the joy of playing a walk-on part in an amazing show.

The exhibition ran at the British Library from October 2018-February 2019. It originated in the Library’s purchase of the tiny St Cuthbert’s Gospel in 2012 for £9 million, partly raised through public donations. That little, hand-sized, book is so valuable because it was placed in the coffin of St Cuthbert when he died in 687. It is also the earliest European book to survive with an intact binding, in beautiful red goatskin, with intricate patterns tooled onto the surface. The desire to display it in its manuscript context was the spur for the whole exhibition, so brilliantly masterminded by Claire Breay. In the exhibition, the Cuthbert Gospel was dwarfed by the book in the neighbouring case, similar in being produced in the same Northumbrian scriptorium at the same time, but utterly different in scale. The Codex Amiatinus, the earliest complete Latin Bible, is monumentally huge, too big to be handled by a single person. Somehow or other, perhaps in an unbound state, it was carried across the Alps by Ceolfrith, abbot of the monasteries of Wearmouth and Jarrow and a group of his monks as a gift to the shrine of St Peter in Rome. This was the first time it had ever left Italy since it was taken there in 716. Daring even to dream of such a loan demonstrates the audacious scope of this breath-taking exhibition. 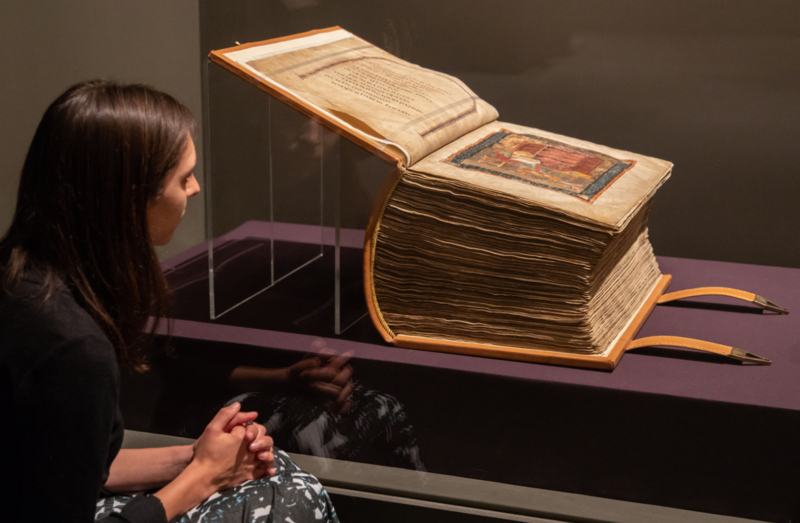 This is one example of many strikingly effective juxtapositions. Placing objects from the Staffordshire Hoard next to the Sutton Hoo belt buckle made you see quite how massive and exquisite the material from Sutton Hoo is compared with that from the Hoard. Placing the namestone from Hartlepool next to the Lindisfarne Gospels made it clear that it is a gospelbook in stone. Having the four manuscripts which contain almost all surviving poetry in Old English showed how small a part that is of all the literature from the period. And it was genius to place the image of Cnut in the New Minster Liber Vitae, in which his sword pierces the frame, next to an actual Scandinavian sword of the same type. It is hard to display manuscripts to a public audience: their visual sameness, their unfamiliar languages and scripts, their flatness, are a challenge. A real sword helps bring such an image to life.

The exhibition was as much about people as parchment. It opened with Spong Man, the modelled figure of a person sitting, head in hands, on the lid of a fifth-century cremation urn. This arresting image captured what drew me into this period: its beguiling mixture of the startlingly familiar and unsettlingly odd. Later on in the show you could see a rare copy of Primasius’ Commentary on the Apocalypse, originally written in the mid-sixth century in modern day Tunisia. On one page of this copy, you can see annotations in the hands of both Boniface, bishop of Mainz in the early eighth century, and Dunstan, archbishop of Canterbury in the late tenth century. This was a world in which books had the power to bring people together across continents and generations.

It was also very much a historians’ view. Earlier exhibitions at the British Museum, notably The Golden Age of Anglo-Saxon Art (1984) and The Making of England (1991) had been more art historical and archaeological in their approach. But here you could see not only a whole series of ‘firsts’ – the earliest surviving single sheet charter, the earliest letters in Latin and in Old English, the oldest copy of the rule of Benedict – but also such fundamental texts for our understanding of political history as the 736 Ismere charter in which Æthelbald, king of Mercia is described as ‘Rex Britanniae’, the 803 document which abolished Offa’s effort to create a new archbishopric at Lichfield, and the record of the agreement at the Council of Kingston in 838 between Ecgberht king of Wessex and Ceolnoth, archbishop of Canterbury. The result is that the exhibition, and the gloriously well-illustrated catalogue that accompanies it, have been a joy to teach with.

The design was daringly unconventional: starkly simple and uncluttered, beautifully lit to show each object at its best, no multi-media zaniness, and short, simple captions to draw you in (‘Knife with a name’, ‘Don’t steal this brooch’), some jokes (‘Antiquarius’ defined in a glossary as ‘one who writes big letters’), and enough to lead you back to the objects to look at them again more closely. Of course some people had quibbles. It was a victim of its own success which meant some queueing, and labels too small and low down to read over peoples’ heads. And it would have been good to have had more of the sound of Old English and Old Norse and Anglo-Latin and wooden hunting horns. But for me, and many others, this exhibition will live long in the memory and will no doubt echo in many books to come.

Discover the history and culture of the Anglo-Saxons

Discover the history and culture of the Anglo-Saxons