This spring, the Bodleian Library’s new Weston Building will host an exhibition entitled A Renaissance Royal Wedding, marking the 500th anniversary of a landmark sixteenth-century match. On 18 April 1518, the Italian princess Bona Sforza married Sigismund I, King of Poland and Grand Duke of Lithuania, in Cracow cathedral. These lavish nuptials forged links of politics and kinship between the Jagiellonian dynasty of Central Europe and the top families of Renaissance Italy, opening up new channels of communication between the Polish capital and the cities of Italy’s far south – a dynamic exchange of people, books and ideas which continued for decades, in a story still unfamiliar to many scholars and students of the sixteenth century. Bona Sforza (1494-1557) was a Milanese-Neapolitan princess, from 1518 queen of Poland and from 1524 duchess of Bari, in Puglia, and thus Italian ruler in her own right. King Sigismund (1467-1548) was the scion of a large royal house which, at its peak c. 1525, ruled half of Europe, from Prague to Smolensk. Their wedding was attended by dignitaries and scholars from across Christendom, and their five children – who later ruled in Poland-Lithuania, Sweden and Hungary - presented themselves throughout their lives as Polish-Italian royalty. Bona herself remains a controversial, high-profile figure in Polish memory to this day.

The Bodleian exhibition showcases Oxford’s exceptional collections relating to early modern Poland and Italy. Its highlight is Queen Bona Sforza’s own prayer-book, not displayed in the UK in living memory, a tiny treasure of Central European manuscript illumination, painted by the Cracow master and monk Stanisław Samostrzelnik, and decorated throughout with her Sforza coat of arms. Other objects in the display include an account of Bona’s bridal journey across Europe (the first book ever printed in Bari), a Ferraran medal of Bona from the Ashmolean’s collections, and early 16th-century orations, chronicles and verse produced in both Cracow and Naples testifying to the Italian-Jagiellonian connection. The display, curated by Natalia Nowakowska and Katarzyna Kosior, is part of a European Research Council (ERC) funded project based in the History Faculty, entitled Jagiellonians: Dynasty, Memory and Identity in Central Europe. To accompany the display, a public lecture and international conference on Renaissance royal weddings, with speakers from 13 countries, will be held in Oxford in April 2018. 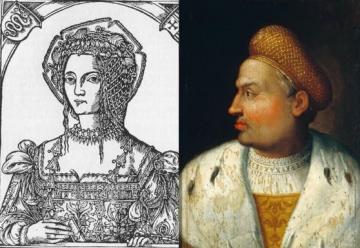 Sigismund I and Bona Sforza

Historians have over the years investigated early modern royal weddings from a number of angles: as key episodes in international diplomacy, occasions for the creation of major cultural artefacts (music, poetry), ritual performances to be read through an anthropological lens, or examples of ‘cultural transfer’ between courts affected by royal women. The Jagiellonians Project, however, is interested in early modern contemporaries’ understandings of what exactly ‘dynasty’ itself was, and royal weddings are a classic moment in which such ideas were articulated. Before the 1510s, King Sigismund’s lineage had been known by a variety of names: ‘the house of Poland’, the ‘house of Casimir’ (his father), or the ‘house of Lithuania’ (their patrimony and place of origin). At the 1518 royal wedding, and in ceremonies along the bride’s route from Bari to Poland, humanists from Naples, Austria, Germany and Poland composed orations and poetry in neo-classical style praising Bona’s illustrious descent, stressing her membership of the great house of the Sforza dukes of Milan (via her father, Gian Galeazzo Sforza), and of the Aragonese royal family of the kingdom of Naples (via her mother, Isabella of Aragon). In response, from 1518 onwards, humanists at the Polish court began to develop a matching, increasingly elaborate rhetoric about King Sigismund’s royal family, in the process devising new genealogical texts, new narratives and a new name for it – ‘Jagiellonian’, a reference to the groom’s grandfather Jogaila, grand duke of Lithuania and from 1386 king of Poland. The king’s secretary Jodocus Ludovicus Decius, who in 1518 published the fullest account of the wedding celebrations, followed this up in 1521 with his landmark ‘dynastic’ text, On the Jagiellonian Family, where a giant, now-iconic family tree sat alongside woodcuts of King Sigismund and Bona Sforza as bride, invoking their recent nuptials.

Royal weddings in the Renaissance period did create new geopolitical dynamics, alliances and inheritance claims; new flows of courtiers, scholars, cooks and artists from one foreign court to another;  new avant-garde music, art and ephemeral display. To this, we might add that they could also act as a catalyst for the transmission of new political ideas and rhetoric. Bona is today buried in Bari’s labyrinthine old town, on the edge of the blue Adriatic, in the Basilica of St. Nicholas. Poland’s most controversial queen, she has consistently inspired modern plays, novels, paintings and film. Vilified by 19th and 20th century nationalists, she is also alternatively remembered as a cosmopolitan figure who blended together Polish and Italian Renaissance politics and culture – in a cross-European fusion. Her children used the Sforza coat of arms throughout their lives, but they also signed themselves in letters, books, wills and even on their tombs as ‘Jagiellonians’, the name by which historians have unhesitatingly called this great dynasty since the 19th century. But perhaps that too was a name which, to some extent, they owed to their mother and the literati who lauded her Cracow wedding, 500 years ago this spring.

A Renaissance Royal Wedding can be seen in the Weston Library, Broad Street, Oxford, from 17th March to 13th May 2018.

We could love to be able to keep in touch with you to let you know about upcoming events, news from the Faculty and to send you the Faculty e-newsletter The Oxford Historian. Make sure your details are up to date here!