Fabrice Langrognet - Neighbours of Passage: A Microhistory of Migrants in a Paris Tenement, 1882-1932 (Routledge, 2022) 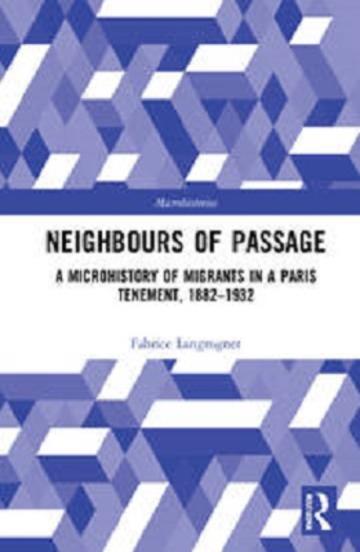 The book is a sociocultural microhistory of migrants. From the 1880s to the 1930s, it traces the lives of the occupants of a housing complex located just north of the French capital, in the heart of the Plaine-Saint-Denis. Starting in the 1870s, that industrial suburb became a magnet for working-class migrants of diverse origins, from within France and abroad. The author examines how the inhabitants of that particular place identified themselves and others. The study looks at the role played, in the construction of social difference, by interpersonal contacts, institutional interactions and migration.

The objective of the book is to carry out an original experiment: applying microhistorical methods to the history of modern migrations. Beyond its own material history, the tenement is an observation point: it was deliberately selected for its high degree of demographic diversity, which contrasts with the typical objects of the traditional, ethnicity-based scholarship on migration. The micro lens allows for the reconstruction of the itineraries, interactions, and representations of the tenement’s occupants, in both their singularity and their structural context. Through its many individual stories, the book restores a degree of complexity that is often overlooked by historical accounts at broader levels.

Find out more from Routledge