Was the Gold Coast ‘decolonised’ or did Ghana win its independence?

I am Professor of African history at Oxford, specialising in the twentieth century history of central Africa. I focus on the achievement of independence and the political and social history of Africa in the early decades of self-government. I chose to focus on Ghana as the first sub-Saharan African colony to achieve independence because it helpfully illustrates the ways in which Africans actively influenced the pace and nature of decolonisation, but also that the achievement of formal political independence did not address all the expectations ordinary Ghanaians had for social and economic change following the overthrow of colonialism.

In 1957 the British colony of the Gold Coast became the independent nation of Ghana. Did Britain grant Ghanaian independence or was this the result of the actions of Ghanaian nationalists, led by Kwame Nkrumah?

Many historians see the post-World War Two period as one of British retreat from its empire. Britain was economically weakened and in debt to the United States, which opposed continued European colonialism. Although India achieved independence in 1947, Britain initially sought to compensate for the loss of its Asian colonies with increased economic intervention in its African ones: it also trained a new generation of African civil servants to replace their British counterparts. This has been characterised as a ‘second colonial occupation’. Influenced by the Universal Declaration of Human Rights and the new United Nations, Britain was committed to decolonisation when African colonies were ready to rule themselves, but this was commonly imagined as taking 20, 30 or even 50 years.

Meanwhile, a new generation of African nationalists wanted to mobilise a mass movement against colonialism, criticising older African political leaders who sought reform within colonialism rather than its overthrow. Kwame Nkrumah, who returned from studies in the US and Britain to the Gold Coast in 1947, supported protests by poverty-stricken ex-soldiers who had fought for Britain in WWII. In February 1948, these demonstrators were fired upon by British troops and riots broke out across the territory.  Nkrumah and other nationalist leaders were jailed for two months, prompting further demonstrations by students and teachers. In June 1949 Nkrumah founded his own Convention People’s Party (CPP), which launched a mass-based campaign for independence with the slogan ‘Self-Government Now!’. The CPP gained support by linked economic and social grievances to its vision of political independence: rejecting limited British constitutional reforms, the party launched a ‘Positive Action’ campaign of strikes, boycotts and disobedience. 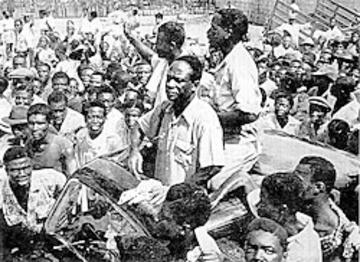 Figure 1 - Crowds welcome Nkrumah as he is released from prison

The British tried to isolate Nkrumah by dealing only with moderate nationalist leaders, and the governor James Creasy labelled him as a "a thorough-going Communist". Nkrumah received a three-year jail sentence for subversive activities. But far from isolating him, Nkrumah became a ‘prison graduate’ whose political credibility soared because of his imprisonment. In 1951, Nkrumah was able to stand for election from his prison cell, and his CPP won 34 of 38 seats. Nkrumah was freed from prison by the British governor Charles Arden-Clarke on 9 February 1951, and become leader of government business later the same day.

During the next six years, Governor Arden-Clarke and Nkrumah worked closely together to prepare the Gold Coast for independence as Ghana, achieved on 6 March 1957. These political opponents, now working together, achieved a quicker transition to nationhood than anyone had thought possible a decade earlier. Nkrumah, once regarded as a dangerous radical, was now thought as both a credible leader of the Ghanaian people, and as a reliable partner for future British interests. As the Union Flag was lowered and the new Ghanaian flag, with its black star at the centre, was raised, national independence and decolonisation were officially achieved. Whether Ghana would be truly free from external control remained to be seen.

This resource reflects a historiographical debate re whether the British granted independence to its African colonies or if the historical evidence suggests that mass nationalist campaigns enabled a more rapid and fully realised independence than British officials desired or envisaged.

It also invites students to consider the extent to which Nkrumah (and other nationalist leaders) was able to shape the nature of their independent states, or if they achieved only formal independence, but remained dependent, politically and economically, on their formal imperial powers and more broadly on a global economy over which they exercised little control. Students may wish to debate the meaning of the words ‘self-government’, ‘independence’ and ‘freedom’ in relation to this case study.