Was Britain really committed to independence for its Middle East Mandates, or was the Mandate System just another form of empire building? 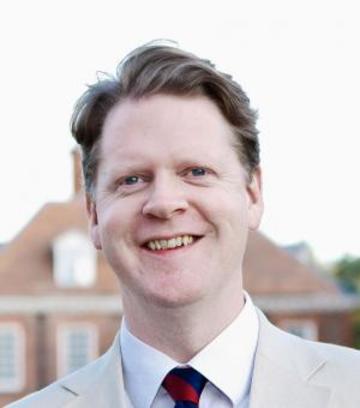 Eamonn teaches and writes about the Middle East, and his current research interest is British intelligence operations in the region during and after WWI.

Following the First World War (1914-1918) the League of Nations was created, in January 1920, as a result of the Paris Peace Conference. An international organisation whose primary goal was to maintain world peace, the League’s ambition was weakened by the fact that the United States never joined the organisation, and that Germany, for its role in WWI, was not allowed to become a member.

One of the League’s most far-reaching, and controversial, decisions was to create the Mandate System. Under the Mandate System, the legal control over certain territories was transferred from a defeated power to a victorious one. In the case of the Middle East, the defeated power was the Ottoman Empire, which ceased to exist as a result of the war: the victorious powers that were granted Mandate status over former Ottoman lands were Britain and France.

Two of the most important clauses of the Mandate System were that i) the mandatory powers (i.e. Britain and France) did not have the right to annex, or make these territories their own, and ii) mandate powers had a “sacred trust of civilisation” to develop the territory for the benefit of its native people. This meant that the mandated territories could not, or should not, simply become part of the British or French empires, and that those territories must also be granted independence. The League of Nations granted Britain mandates in Iraq and Palestine (in modern-day Israel and Jordan), and for the French in Syria and Lebanon.

Having granted Britain a mandate for Iraq, the British government turned to Gertrude Bell to help create an identity for this new country. Gertrude Bell (1868-1926) was a remarkable woman in many different fields of endeavour. The first woman to gain a First Class degree in History from the University of Oxford, she was also a world-class mountaineer, adventurous traveller, best-selling author, archaeologist and photographer. Throughout WWI, she also worked as a British intelligence officer, the only woman in such a role in the Middle East. One of her colleagues at the Cairo-based Arab Bureau was TE Lawrence, better known as Lawrence of Arabia. Having travelled widely throughout Arabia and Mesopotamia (modern day Iraq) before the war, and knowing many of the local rulers and ordinary tribesmen and women, the British authorities saw Bell was the perfect choice for the difficult task of forging a new nation in Iraq. 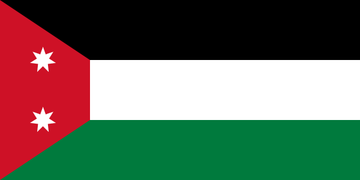 Among the many tasks facing Bell and her colleagues was to create an Iraqi flag (left), national anthem, money and stamps, not to mention deciding on the country’s national borders. This last task was easily the most challenging, and controversial, with a colonial power (albeit, thanks to the Mandate System in the guise of a benign and disinterested party) drawing lines on the map, and discussing this more with their French colonial rivals, rather than consulting too closely with the many different local tribes. Between them Lawrence and Bell even suggested making Faisal bin Hussein, a non-Iraqi Arab, king of the new country. Faisal had fought alongside the British during WWI, when his father, Hussein Sharif of Mecca, launched the Arab Revolt against Ottoman-Turkish rule. Having failed to secure their lands in Arabia after the war, making Faisal king of Iraq was seen as a consolation prize. As a wartime ally, the British saw it would be useful to have a compliant Faisal installed as the king of Iraq. 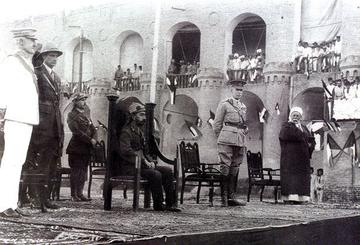 Faisal’s coronation (right), which Bell attended as an honoured guest, was the new king’s trip to the country he now ruled over. Few Iraqis knew who their new king was, and many were unhappy at his being imposed upon them. After her role in creating Iraq, Faisal asked Gertrude Bell to stay on in Iraq and help build certain institutions. Among other things, Bell was central in establishing both the National Library and the National Museum, which opened in June 1926, a month before her death at the age of 57.

i) Gertrude Bell Archive (University of Newcastle): http://gertrudebell.ncl.ac.uk/ and more images from that archive including one of Bell with Winston Churchill and TE Lawrence: http://www.bbc.co.uk/news/uk-england-tyne-25775990

vi) A map of the region covered by the 1916 agreement can be found here: https://en.wikipedia.org/wiki/Sykes%E2%80%93Picot_Agreement#/media/File:MPK1-426_Sykes_Picot_Agreement_Map_signed_8_May_1916.jpg