These lectures investigate the structures and aspirations of the family as central forces that propelled and maintained the upsurge of British imperialism that marked the century from Robert Clive’s celebrated victory at Plassey in 1757 to the declaration of Crown rule in India in 1858.  Historians hotly dispute the causes of British imperial expansion, variously ascribing colonial conquest in the eighteenth and nineteenth centuries to ideological, cultural, political and economic push factors.  By taking family and kinship—in their myriad British and cross-cultural forms—as its focal points, this series of lectures reassesses and resituates these interpretations.  It also takes seriously the contribution made to East India Company rule on the subcontinent by the forgotten majority of the British population: woman and children.  Without reducing empire to family, the lectures argue that family imperatives made British empire in India both desirable and possible.  Contested understandings of kinship, moreover, lay at the heart of British understandings (and misunderstandings) of Indian politics in this period.  Family writ large thus emerged as a powerful and contentious paradigm for governance in the Company era.  To exemplify these lines of argument, the lectures address topics that include demographic growth, marriage, perceptions of racial difference, property relations, the material cultures of East India Company homes and Georgian and Victorian conceptions of dynastic politics. 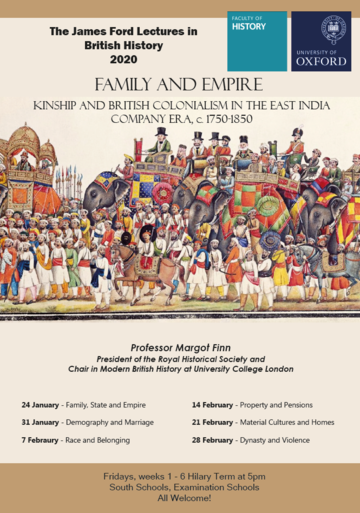