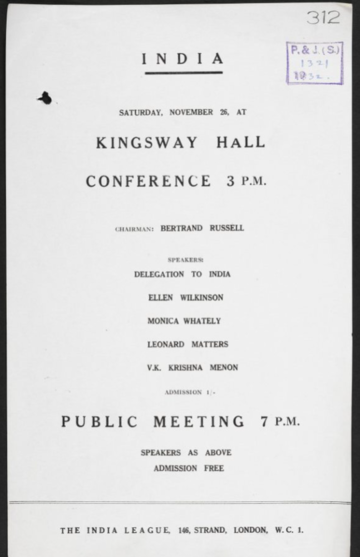 The India League was founded in 1916 by Annie Besant, to campaign for greater autonomy for India within the British Empire. In 1928 it was taken over by V.K. Krishna Menon, and began demanding full independence for India. It engaged in intensive propaganda work, organising meetings, distributing pamphlets and attempting to publish a regular newspaper. The League soon attracted the support of some significant figures in British progressive circles: intellectuals like Harold Laski and Bertrand Russel, radicals like Fenner Brockway and Ellen Wilkinson, and future Labour Ministers, such as Stafford Cripps and Aneurin Bevan.

Through these figures, the League was even able to draft questions that were asked in the House of Commons, often embarrassing the Ministers and India Office, and breaking their jealously-guarded monopoly on ‘information’ from the subcontinent. Their biggest success in this period was organising a visit by four senior Labour figures to an India convulsed by nationalist protests and repressive ‘ordnance rule.’ The book they produced is a shocking indictment of colonialism, and a powerful refutation of the ‘civilising’ claims of the Raj.

The League struggled with insolvency and encountered widespread indifference to India’s plight, but managed to score two further successes: In 1938 Krishna Menon helped organise a meeting between Nehru and the future leaders of the 1945 Labour government: there they agreed the terms for what would become India’s independence. In 1944, Krishna Menon finally moved the Labour Party conference to declare itself wholeheartedly in favour of Indian independence.

I am interested in the League because of the ways in which it attempted to make the claims of Indian nationalism ‘fit’ in with British socialism in the interwar period. I believe that the India League is a fascinating organisation to any historian looking at Empire and at Indian nationalism, but also shows us how colonised populations (often corresponding to what we now call BAME) managed to overcome immense obstacles and successfully navigate the corridors of power of the imperial state itself.