On April 16th 1604, in Wighton, Yorkshire, a sheriff named Giles Bateson and his two assistants attempted to arrest Robert Webster. Despite being in possession of a legal writ from the central courts at Westminster, and Bateson’s authority as a sheriff, the arrest was unsuccessful: Bateson and his colleagues found themselves ‘wound[ed] and beate[n] down to the ground’, an angry crowd ‘trample[ing] and tread[ing] upon them with their feet’, to the point that ‘they were in great danger of their lives’. One Thomas Wilberfosse, a member of the crowd, went so far as to demand ‘where now is the warrant for this arrest?’ before ripping out a handful of Bateson’s beard, and declaring ‘here is the warrant’ while brandishing his fistful of hair. The crowd responded with gusto, proceeding to riot ‘then and there make a great shout and noyse and continewed in that tumult and uproare for the space of two howers’. Webster was very much not arrested, and the crown’s officials had been left injured, muddy and looking pretty stupid.

How had things gone so wrong? And what does this incident tell us about early modern government? 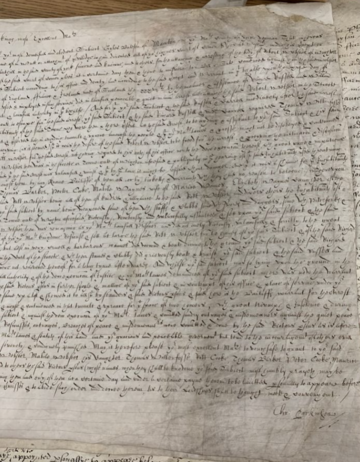 One of the most important questions that historians of government in early modern England face is a deceptively simple one: why did people obey the state’s officials? The unpaid magistrates that were entrusted with maintaining law and order across the realm – such as Justices of the Peace, sheriffs and constables – were usually unarmed, and often outnumbered by passersby on the street of unfamiliar towns and villages. And authority wasn’t simply imposed: the people of early modern England received, interpreted and responded to the attempts of officials to order them about. So why did people obey the magistrate arresting them – and, perhaps more importantly, why didn’t they?

My approach to these questions is to try to reconstruct these moments, by thinking about them as performances in front of an audience. Historians have often relied on the word ‘performance’ to talk about the deployment of authority in early modern England: it suggests that there’s something more to an action, that the action represents something else, but generally, historians leave it there. However, my background is in History and English: I have a masters in Shakespeare Studies, and my DPhil thesis was about how the drama of the period stages the state. So, I’m borrowing from drama studies by treating these interactions as literal performances, thinking about how the magistrate managed to ensure his authority was accepted.

What that means is I find moments in archival records where we have good detail on how authority was enacted, and then stage them, with actors. Now, the problem with researching government as it was carried out is that we often don’t have records: nobody went around recording the arrests that were successful! This is where the Webster case comes in handy: interrupted and resisted arrests were prosecuted in the court of Star Chamber (one of the highest courts in the land) as ‘rescues’. Because of the nature of Star Chamber, the bills of complaint where the interrupted arrest is described are often very detailed. As such, staging arrests that went wrong allows me to explore how the magistrates attempted to govern their audience, and to pinpoint where things went so badly wrong.

In early March 2020 I carried out two practice as research workshops. One was on riot management, and the other staged the Webster arrest. The bill is very detailed [see image] so it was easy to turn it into a script. I wanted to see how magistrate and audience related to one another, and if there was a clear moment when the magistrate’s performance failed.

The first thing that became clear by staging this rescue was realising how much of a threat the passersby in the street of Wighton posed to the arrest: while in the legal record itself, the bystanders only become visible once they start to protest against Webster’s arrest, staging the arrest made it clear how they, present from the very beginning, needed to be convinced by ‘Bateson’ of the legitimacy of the arrest. The other thing that immediately became clear was that the success of the arrest depended upon the bystanders remaining uninvolved: an unarmed magistrate needed those present to become an audience, instead of intervening in the arrest, and possibly hurting the magistrate. When ‘Bateson’ entered, the actor instinctively brandished the ‘writ’, performatively emphasising his authority, and turning to the ‘bystanders’, as if appealing to them. When the actor playing Wilberfosse intervened, moreover, loudly yelling that the arrest was unlawfull and unjust and that by the law it might be resisted without danger; and that it was a shame for the inhabitants to suffer any such honest neighbour as the said Webster was to be taken from amongst them by any knave Bailiff of them all, or by tickets and warrantes which they had no reason to believe, he invaded the space that had previously only been occupied by Bateson and his junior officers. The audience was starting to invade the stage.

The reference to the magistrates acting unlawfully, moreover, acted as an appeal to those present, encouraging them to stop being an audience. At this point, the crowd’s attention was drawn away from the magistrate: ‘Bateson’ was no longer the only performer. It’s also notable that the appeal to legality was so important: early modern English people were exceptionally litigious, and most people had far greater working knowledge of the law than we do today. It’s therefore not so surprising that declaring that the arrest was unlawful made such a difference, but it was palpable how badly it affected ‘Bateson’’s authority: the bystanders stopped looking to him, and looked to ‘Wilberfosse’ instead. The beard-pulling worked in a similar way, as we can see from the legal record: the performative action ridiculed the legality of the magistrate’s actions, encouraging those present to shout and continue to beat up the outnumbered magistrates.

Why is this little episode important? Firstly, because it shows that early modern  people understood that the idea of the law could be used in very effective resistance to the state’s officers. Secondly, it demonstrates how fragile magisterial authority was: staging this moment made it clear how precarious ‘Bateson’’s authority had been in a street full of people that were clearly on the edge of resisting his actions. It’s notable that the bill of complaint refers to Wilberfosse ‘publicly in the hearing of the said inhabitants’ insulting the authority of the magistrates: in a lot of these cases, we see the assertion being made that disrespecting authority was dangerous. After staging this arrest, I began to see why: watching ‘Webster’ pass from the hands of the magistrates into those of the crowd, and the crowd beignning to side with ‘Wilberfosse’, made it seem that the authority of the state’s officials was, frankly, meaningless. Witnessing magistrates failing to exert their power undermined the public’s belief in the state’s ability to regulate behaviour, and further risked future incidents like this one.

Arrests, like other moments of a magistrate attempting to enforce his will, were a performance, where the magistrate needed to successfully assert his authority, and the people present needed to accept it. If they didn’t, well, that’s how you ended up like Giles Bateson, lying in the street with half your beard yanked out.