It is not surprising that medieval pandemics have attracted attention in recent years.

The so-called Black Death (1347-53) is surely the most famous of these, but it is not the only one. The same pathogen, Yersinia pestis, was responsible for a series of waves of plague which swept the Mediterranean world from c. 541 to c. 750. Beginning during the reign of the Byzantine emperor Justinian, this plague, at least its initial phases, is typically referred to as the ‘Justinianic plague’. While it has long been studied, in recent years new research methods emerging on the interface between the humanities and natural sciences have reinvigorated the scholarship.

Research into ancient DNA, harvested from the skeletons of plague victims, has provided new evidence to help us understand the pandemic’s spread, sometimes providing vital evidence for regions in which no textual evidence survives. Growing interest in environmental history—again drawing on the skills of historians, archaeologists, and natural scientists—has also helped us appreciate the importance of non-human agents of change. The more subjective and personal elements of the past remain central to the historical endeavour, however, even when dealing with matters (like the spread of a pathogen) which are also susceptible to scientific analysis.

To understand something of the perception and experience of plague, we have to turn to highly fragmentary and difficult written sources. I want to focus here on just one: a remarkable collection of four sermons from Visigothic Iberia (that is, Spain and Portugal). These sermons, written as a coherent set by a single author, address an audience awaiting the onslaught of plague. The sermons are anonymous: we do not even know the city in which they were composed.

That said, the sermons were clearly the composition of a bishop, aiming to preach at a time of communal disaster. They offer an unparalleled insight into the way plagues were interpreted by Christian authorities and the way this understanding was communicated to ordinary Christians. This, of course, is only one very partial view on the matter—as will become clear in due course—but it is an important and useful one, nonetheless. 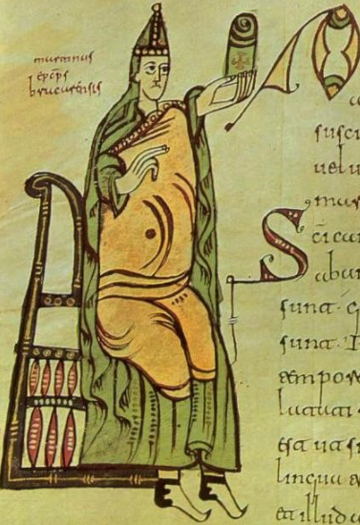 The bishop Martin of Braga, as depicted in the tenth century Codex Albeldensis

The emotional pitch of the sermons is high: ‘the mournful tale of the messengers terrifies us, as it describes the borders of our lands afflicted with pestilence, and introduces bloody death as our neighbour’. The first sermon makes much of the horror of anticipation, ramping up the tension by references to the plague’s progress ‘with quick steps’ from the coast toward the inland city. The point of evoking, again and again, the looming presence of the plague was, at least in part, to present the coming plague as a foretaste of the Last Judgement—for this loomed always over people, argued the preacher, whether or not they were aware of it.

The fear people felt at the prospect of the plague could be channelled into fear of God’s judgement and anxiety at human sinfulness. The horror of the plague was a wake-up call, in the preacher’s eyes, that made clear the stakes of the afterlife: ‘I can see divine judgement looming over us, and I am compelled to rouse you from bodily sleep’.

Communal disasters like plagues offered bishops an opportunity to assert their claims to moral leadership. In sermons, they tried to shape and direct the responses of their audiences in particular Christian directions. They offered interpretations of disaster that made such events speak of wider themes: plagues could be seen as judgements from God, reflecting the sinfulness of human beings; present-day disasters could be foretastes of the punishments of hell. Christians were implored to look within themselves and meditate upon their sins, repenting for past wrongdoing and reforming themselves for the future. This repentance, preachers argued, was a way of reforming sinful behaviour, so that one might slowly make oneself worthy of salvation.

As vivid and emotionally rich as these texts are, they present substantial problems of interpretation. What we find in sermons is a largely one-sided conversation. They are records of people being spoken to by clerics—that is, by a subset of elite men who had dedicated their professional lives to the church.

Many voices are not present. We know very little about how early medieval sermons were received by different groups of people within the congregation. Indeed, sermons often used highly universalizing language, addressing their audience as generic Christians in need of the same moral lessons rather than as a group differentiated by gender, class, age, and so on.

This means that it is hard to reconstruct the audiences of early medieval preaching. We have even less awareness of how Christian ideas were understood, embraced, or resisted by those who did not attend regular church services (possibly the majority of people in many regions), and still less by religious minorities like the kingdom’s Jewish population.

We can, however, occasionally detect elements of dialogue between different Christian positions within individual texts. Sermons were written with real audiences in mind, and they often responded to the ideas and expectations of those who were to hear them. In the Iberian sermons discussed above, for example, the preacher argued against the position—apparently held by some congregants—that the plague’s arrival would indicate that the city’s inhabitants had failed to attract God’s mercy.

The preacher clearly faced anger and hostility, as well as bitter disappointment, if demands for penance did not translate into salvation from the plague. Against this, the preacher had to argue a difficult position: that the congregation’s anguished penance might not affect the course of the plague, but that it might nonetheless help people acquire rewards in the world beyond, after death. This idea—of a merciful God whose rewards were mysterious and often not evident in this world—was an idea, it seems, that was not embraced by all early medieval Christians, however central it was to the ‘official’ doctrine of most priests.

Further problems of interpretation emerge when we consider how the sermons have been transmitted to us in the present day. We very rarely have direct access to early medieval texts: what we usually have are later copies, each made at different times, in different contexts, sometimes with substantial differences from the original text. In the case of the plague sermons discussed above, they survive in a single eleventh-century copy, within a much larger compilation of sermons by well-known authors like Augustine of Hippo, Gregory the Great, and Caesarius of Arles. Historians have made convincing arguments that the plague sermons are Iberian texts which date from the sixth or seventh centuries, but this is a matter of probability rather than absolute certainty.

There is a further point here. We often have access to texts like sermons through their inclusion in compilations made centuries after the original texts were written and first preached. When re-used, many of these texts were re-edited into new compositions, sometimes undergoing many changes by many hands, such that the idea of a single ‘author’ becomes inappropriate. In the Iberian Peninsula, we know of some bishops like Martin of Braga (pictured above), who composed sermons in his diocese in what is now northern Portugal.

Sadly, however, few such texts survive. Often, as with the plague sermons, we cannot place the texts in a precise historical and geographical context, but must, instead, speak in more general terms.

Furthermore, the fact that such texts were used and re-used by different people means that we should not only think of one context. Though one individual wrote the sermons for one particular context, they were used by others in later, different contexts. When reading medieval texts of this kind, then, we are rarely dealing directly with one moment of authorship, but with a whole chain of use, re-use, copying, and compiling. This is especially true for sermons. Delivered orally, preachers may have performed them in very different ways, and doubtless modified the content and extemporized when they saw fit. Texts were much more fluid that they may at first appear.

Texts like the Iberian plague sermons are rich and fascinating windows into the emotional and spiritual stakes of pandemics. Yet, like so many early medieval sources, they also present formidable difficulties of source criticism, requiring us to think of texts in less rigid and fixed ways than we are often accustomed to. The manner in which texts of such apparent emotion immediacy can also be part of such convoluted and complex lines of transmission is instructive for how we think about textual interpretation more generally. While scholarship on the boundary of the humanities and natural sciences promises to open important new vistas in our understanding of the medieval past, such questions of textual criticism continue to hold an essential place alongside them.