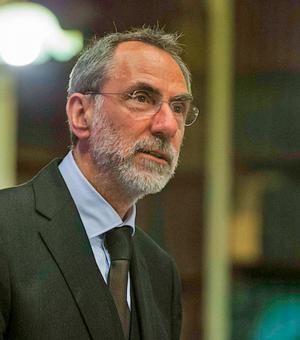 Professor Sharpe's interests are broadly the history of medieval England, Ireland, Scotland, and Wales. He has a special concern with first-hand work on the primary sources of medieval history, including palaeography, diplomatic, and the editorial process, which is the core of his teaching in Oxford.

In the context of medieval archives and documents, this finds expression in research on charters of the eleventh and twelfth centuries. In the context of books and libraries his long-term research project on medieval library catalogues has opened up a mass of information on what works were available to read in medieval England, at what periods and in what settings. He takes a view of medieval bibliography that combines the textual and material aspects of books, and in his Handlist of the Latin Writers of Great Britain and Ireland before 1540 the biographical and antiquarian dimensions are not forgotten. It was interest in what could be added to our knowledge and understanding of medieval sources from the work done by sixteenth- and seventeenth-century antiquaries that led him to investigate antiquarian correspondence, particularly that of Edward Lhwyd, which has opened up some fruitful lines of research. Charters and letters have much in common, medieval manuscripts and early printed books are inseparable parts of the history of the works read down the centuries, and all of these uses of writing serve as a means to enhance modern understanding of the distant and not-so-distant past. Books or documents in their material reality communicate with modern students on several levels, all worth our understanding.

Welcome to this presentation of my research as available to read. A list of my publications, complete with abstracts, can be downloaded as a PDF. This is for the seriously curious. It runs to more than 40 pages. Think before you print.

Let us start with something still hot but not yet off the press, a preview of my contribution to a festschrift, which has aired uiua uoce in Oxford, London, and Helsinki:
‘King Ceadwalla and Bishop Wilfrid’, Cities, Saints and Scholars in Early Medieval Europe. Essays in honour of Alan Thacker, ed. S. deGregorio & P. J. E. Kershaw (Turnhout: Brepols).

Some headings to help navigate:

charters of William II and Henry I

from before the PDF era, mostly Bede and saints

The big project to collect, edit, and interpret around 2000 charters of William II and Henry I has its own webpage. https://actswilliam2henry1.wordpress.com/

Click on The Charters and select completed archives from either reign. For some institutions there are beneficiary archive files under both William II and Henry I, though, when complete, the number for Henry I will be four times that for William II.

A particular big one to watch out for is ‘Proclamations, Treaties, Letters’.

For instant gratification here are some articles, most of them fairly recent, with links to other sites in some cases. Work within the field of eleventh- and twelfth-century British history, much of it charter-based, forms the staple diet.

‘Common carriers in medieval ’, Oxoniensia 81 (2016), 27–61. Centred in the fifteenth century and drawing for the most part on account rolls.

‘Tenere in capite and tenant in chief’, posted with Charters of William II and Henry I. 10pp.

‘Peoples and languages in eleventh- and twelfth-century and : reading the charter evidence’, in The Reality behind Charter Diplomatic in Anglo-Norman Britain, ed. Dauvit Broun (, 2011), 1–119: available at http://paradox.poms.ac.uk/redist/pdf/chapter1.pdf

or try the whole book at http://paradox.poms.ac.uk/ebook/index.html

Norman Rule in Cumbria 1092–1136 (Surtees Society Presidential Lecture, delivered at the AGM of C&WAAS, Carlisle, 2005), and Westmorland Antiquarian and Archaeological Society, Tract Series 21 (2006). 78pp. Copies of the booklet are still available from the C&WAAS at http://cumbriapast.com/cgi-bin/ms/main.pl?action=publications&pub_id=20

The obituary from the British Academy's Biographical Memoirs of Fellows of my predecessor Pierre Chaplais (1920-2006), who made a distinguished contribution to Anglo-Saxon and Anglo-Norman diplomatic - available at http://www.britac.ac.uk/memoirs/11.cfm

In the area of medieval book-history there is less I am able to post:

There has been and will be some more Medieval Latin, mainly from Britain.

The second half of the book (pp. 355–549) provides a calendar of the contents of Lambeth Palace, MS 51, Peter’s Liber reuelationum, put together in 1200 and comprising nearly 1100 stories of visions, in most cases excerpted from other sources. This allows ready access to visions of the otherworld and stories of contact between the dead and the living, which Peter was able to cull from existing literature. The material first written down by Peter himself is edited and translated with separate introductory essays for each original story or group of stories. With an introduction on Peter’s life and works and an analysis of the manuscript, eight chapters make up the first part of the book. An argument is made that Peter, at the priory of Holy Trinity, Aldgate, was able to draw on libraries in and on professional scribes for hire in the city. His work provides early evidence for the book trade as well as for the library resources available in the capital. Peter’s collection is a considerable resource for studying the understanding of vision literature at the end of the twelfth century, but his purpose, set out in the prologue (pp. 74–115) was to convince his readers of the immortality of the soul and therefore of the existence of God and the four last things.

These two papers are still imminent in August 2019:

The book on Roderick O’Flaherty was the result of an early-modern antiquarian turn, which started with Edward Lhwyd on books containing Pictish and spread to other things.

Roderick O’Flaherty (1629–1716) was a remarkable person, dispossessed heir to a Gaelic chiefdom, who engaged in writing history from medieval Irish sources and corresponded with men of new scientific learning, among them the Welsh polymath Edward Lhwyd in and in Dublin William Molyneux, who began the Dublin Philosophical Society, and his son Samuel. The body of the book prints and annotates fifty-six letters, most of them written by Roderick O’Flaherty from his home in Cois Fhairrge, Co. ; a few letters to him from Samuel Molyneux are included. Using this body of evidence to complement O’Flaherty’s learned writings, the Introduction provides a new biography of O’Flaherty, a survey of his works in Latin and English, and an investigation on the one hand of his involvement with the critical reading of Edward Lhwyd’s Irish–English dictionary and on the other of his attempts to publish his own Ogygia Vindicated. Appendices set out the evidence for O’Flaherty’s wide reading, including a detailed examination of his use of older Irish texts in manuscripts such as the Book of Lecan and the Book of Uí Mhaine.

Lhwyd on Pictish and O’Flaherty on Irish take me back to Celtic roots. Iona and St Columba is a very long-standing interest.

Other recent delvings into Irish manuscripts and printed books are in some cases concerned with the old, in other cases with more recent matters.

(with Mícheál Hoyne) Clóliosta. Printing in the Irish language 1571–1871. An attempt at a narrative bibliography (Dublin: Dublin Institute for Advanced Studies, 2020), well over 800 pages: available on line since November 2018 at https://www.dias.ie/celt/celt-publications-2/cloliosta/

Recent years have also seen me revisit some Welsh interests, including one excursion into medieval Welsh literature.

Accidents happen, as I sometimes pick something up along the way.

‘Tommaso Giordani, Gregorio Ballabene’s Messa a dodici cori con organo, and sacred music in late-eighteenth-century ’, Journal of the Society for Musicology in Ireland 11 (2015–16), 25–35: available at  https://www.musicologyireland.com/jsmi/index.php/journal/article/view/139

And finally, some references from before the PDF-era to papers on Bede and on early British saints.

'The late antique Passion of St Alban', in Alban and St Albans: Roman and medieval architecture, art, and archaeology, British Archaeological Association Conference Transactions XXIV (1999), ed. M. Henig & P. G. Lindley (2001), pp. 30–37. This paper proposed a new textual relationship between the three pre-Bedan passiones, arguing for the priority of what Wilhelm Meyer called the Excerptum (E), which I dated to the mid-5th century. I printed an English translation, but Michael Winterbottom has now reconstructed the original Latin: ‘The earliest passion of St Alban’, Invigilata lucernis 37 (2015), 113–27.

A version of a presentation about the late-eleventh-century Wadham Gospels, the oldest manuscript in Wadham College library, recorded in April 2014 (6mins 22secs).

A presentation - Irish Manuscripts and the Complex Page, from The book: history and practice workshop which took place on March 12 2012 at the UCD Humanities Institute of Ireland.

Le bibliothécaire médiéval - the text of a lecture delivered at the Sorbonne, 18 September 2003, under the auspices of Prof Jean-Philippe Genet and the organisation APICES.

The text of the Latin Sermon delivered in the University Church on Sunday, 19 January 2003.