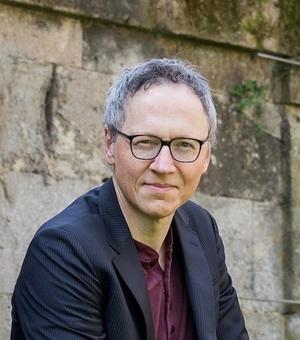 I work on the social, cultural and political history of Europe c. 1760 - 1939, particularly its German-speaking parts. And while my research interests relate to themes rather than particular countries or chronologies, I don't normally supervise theses that fall within the post-1945 period. Themes of special interest include citizenship; nationalism; religion; liberalism and its role in the formation of cultural norms and expectations; time and temporal rhythms; the history of towns and cities; the cultural history of economic life; historiography and theory. The question that preoccupies me at the moment is how ordinary people in the nineteenth century adapted to the acceleration of life and the standardisation of time.

Remaking the Rhythms of Life: German Communities in the Age of the Nation State (Oxford, 2013) 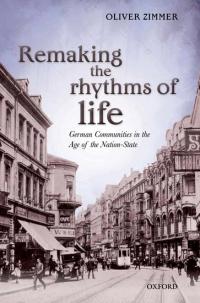 Across Europe the late nineteenth century marked a period of rapid economic change, increased migration, religious conflict, and inter-state competition. In Germany, these developments were further accentuated by the creation of the imperial state in 1870-1871, and the conflicting hopes and expectations it provoked. Attempting to make sense of this turbulent period of German history, historians have frequently reverted to terms such as industrialization, urbanization, nation-formation, modernity or modernization. Using the prism of comparative urban history, Oliver Zimmer highlights the limitations of these conceptual abstractions and challenges the separation of local and national approaches to the past. He shows how men and women drew on their creative energies to instigate change at various levels.

Focusing on conflicts over the local economy and elementary schools, as well as on nationalist and religious processions, Remaking the Rhythms of Life examines how urban residents sought to regain a sense of place in a changing world - less by resisting the novel than by reconfiguring their environments in ways that reflected their sensibilities and aspirations; less by lamenting the decline of civic virtues than by creating surroundings that proved sufficiently meaningful to sustain lives. In their capacity as consumers, citizens, and members of religious or economic associations, people embarked on a multitude of journeys. As they did, larger phenomena such as religion, nationalism, and the state became intertwined with their everyday affairs and concerns.

My next book is a comparative examination of time and social rhythms in the long nineteenth century. Entitled Losing Time and Temper: The Struggle over Clocks and Timetables, 1840 – 1914, this research involves extensive archival work in both England and Germany on conceptions of time, public clocks, train schedules, and railway passengers' expectations, strategies, and emotional states. Historians have commonly associated the nineteenth century, and particularly its later decades, with a homogenisation of people's sense of time. When it comes to explaining this process, the railways tend to take pride of place. As railway traffic grew in density, the ethos of the timetable began to permeate the awareness of individuals and communities. There are problems with this perspective. While recognising the impact of technological innovation, in this research I understand time as a resource that people utilized as they elaborated their lives' schedules. The result was a multiplicity of social rhythms that stood in a relationship of tension to the standardized railway time announced in public timetables. The rhythm of a railway line was thus, to a considerable extent, the product of these human elaborations. While we possess a rich if slightly repetitive literature devoted to the more intellectual and abstract aspects of time, there is a surprising dearth of studies engaging with the practical uses of time in everyday situations, which form the concern of this book. This project benefits from the recent award of a Major Research Fellowship by The Leverhulme Trust.

I would be willing to hear from potential DPhil students regarding my research interests.