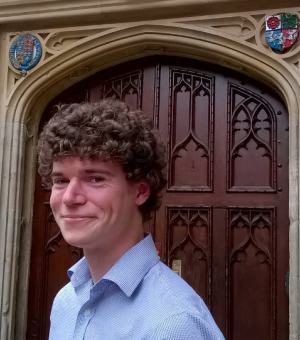 Borderlands and Fatherlands: ‘Foreign’ Soldiery in the Holy Roman Empire 1576-1618

I am a third-year DPhil student based at Pembroke College. My doctoral research deals with the issues of the emergence of German nationhood(s), the functioning of religious peace in Central Europe, and the transformation of the Early Modern military, by examining them at the nexus where they met in Lower-Rhine-Westphalia at the turn of the seventeenth century. Above all, I am seeking to understand in what circumstances, and with what consequences, soldiers serving in this area were classified as ‘foreign’. In a Holy Roman Empire characterised by multi-layered sovereignty and ambiguous frontiers, defining outsiders in this way was an incendiary political question in debates concerning the rights of princes, ‘German liberties’, and the relative merits of mercenaries and militias. In particular, I aim to use the archives of the regional peacekeeping associations known as Imperial Circles as a bridge between local and Imperial perspectives, and to determine whether the Lower-Rhine-Westphalian Circle can be understood as a borderland or as internal to the Reich.

I previously completed my BA in History and my MPhil in Early Modern History at the University of Cambridge, where I carried out research projects on both the global history of piracy and the War of Cologne. There I became a founder member of the Cambridge New Habsburg Studies Network, an interdisciplinary organisation which explores the culture and history of Habsburg Central Europe. At Oxford I have served as Access Officer and later President of Pembroke MCR, with a focus on lobbying for reform of the postgraduate admissions process to promote diversity and combat socio-economic disadvantage. I work for the award-winning Uncomfortable Oxford project as a senior guide, in which capacity I research, write, and lead walking tours highlighting controversial aspects of the city's past. I am also a committee member of the J.R.R. Tolkien Lecture on Fantasy Literature, which hosts public events in which leading authors discuss their work and the state of the genre. My other interests include the intersection of travel and history, which led me to complete a 1000km hike retracing the sixteenth-century ‘Spanish Road’ between Luxembourg and Milan. I blog about this and other aspects of European history here.