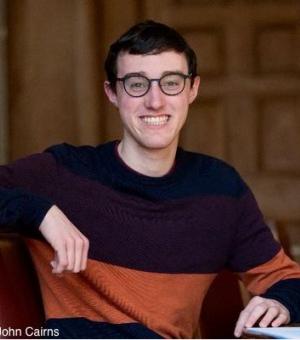 British Military Musicians during the French Revolutionary and Napoleonic Wars, 1793-1815

I am an AHRC-funded doctoral student researching military musicians during the French Revolutionary and Napoleonic Wars. Before beginning my DPhil, I completed an MPhil at the University of Cambridge with a dissertation on honour, duelling and courts-martial in the early nineteenth-century British army. I am a Council Member of the Society for Army Historical Research, one of the world's oldest military history societies, and have published several articles on military memoirs, music, and courts-martial. I have also presented work at a number of academic conferences, including the Music in Nineteenth-Century Britain conference, the Society for Military History conference, and the Wellington Congress. My research has garnered attention from a variety of media outlets, including BBC News, BBC Radio 4's Today Progamme and CNN. I have appeared on the BBC One genealogy show 'Who Do You Think You Are?' twice, speaking with Kate Winslet and singer-songwriter Pixie Lott about drummers and military bandsmen in their family tree. My research on the Georgian diary of Yorkshire tenant farmer Matthew Tomlinson, which includes remarkable reflections on homosexuality, was also featured on 'Songs of Praise' on BBC One in September 2020.

Military music was pervasive in Britain and Ireland during the French Revolutionary and Napoleonic Wars. Regimental bands enlivened martial reviews and public spectacles while drummers and fifers encouraged enlistment by leading recruiting parties through teeming towns and remote villages. As the writings of soldiers and civilians attest, the nation-in-arms was experienced by the ears as much as the eyes.

Within the army, sound was critical to inculcating military discipline, governing soldiers' routines, and conveying orders. Regimental bands and drum corps also enhanced morale, lifting spirits on campaign and in garrison while promoting a wide range of local, regimental and national allegiances.

Military musicians played for myriad public events and staged free open-air concerts for socially diverse audiences in Britain, Ireland, and overseas colonies. Drummers and bandsmen encouraged and amplified expressions of wartime patriotism, helping buttress the British state during a revolutionary age, but were sometimes criticised for playing sectarian tunes, violating the sanctity of the Sabbath, and even emitting noise pollution through their recurrent performances. Military music constituted a form of soft power abroad: it aided diplomacy, enhanced imperial authority, and generally improved relations with local populations.

Ingrained in popular culture after two decades of conflict, martial music was widely emulated by post-war mass political movements. Supporters of parliamentary reform and expanded voting rights, as well as campaigners for Irish self-government, all plagiarised military sound and spectacle with the assistance of ex-servicemen. By marching in step to bands and bugles, demonstrators organised themselves in an orderly and eye-catching fashion while obliquely threatening insurrectionary violence.

Military music, in sum, was an everyday and intrusive part of wartime life, a source of entertainment and opportunity, and a politically-charged exponent of both patriotism and protest. My thesis demonstrates how the legacies of martial music-making echoed far beyond the barrack gates.