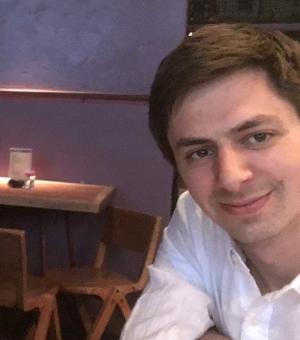 My research focuses on the history of Russia during the nineteenth and early twentieth centuries.  In particular, I look at the religious dissent of the Old Believers - a movement that split Russian Orthodoxy, and whose existence raised questions about religious toleration and civil rights, the nature of the Russian national character, and social and political stability.  I believe that the Old Believers and their position in Russian society can tell us a lot about the identity of the Russian regime and the aspirations of its subjects in the period preceding the collapse of the empire in war and revolution. Before returning to Oxford, where I completed my undergraduate and graduate studies, I was a British Academy Postdoctoral Fellow at UCL’s School of Slavonic and East European Studies. 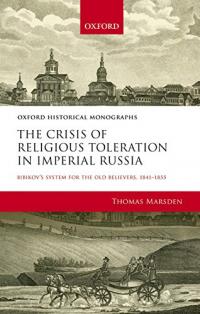 This book is about an unprecedented attempt by the government of Russia's Tsar Nicholas I (1825-1855) to eradicate what was seen as one of the greatest threats to its political security: the religious dissent of the Old Believers. The Old Believers had long been reviled by the ruling Orthodox Church, for they were the largest group of Russian dissenters and claimed to be the guardians of true Orthodoxy; however, their industrious communities and strict morality meantthat the civil authorities often regarded them favourably. This changed in the 1840s and 1850s when a series of remarkable cases demonstrated that the existing restrictions upon the dissenters' religious freedoms could not suppress their capacity for independent organisation. Finding itself at acrossroads between granting full toleration, or returning to the fierce persecution of earlier centuries, the tsarist government increasingly inclined towards the latter course, culminating in a top secret 'system' introduced in 1853 by the Minister of Internal Affairs Dmitrii Bibikov.The operation of this system was the high point of religious persecution in the last 150 years of the tsarist regime: it dissolved the Old Believers' religious gatherings, denied them civil rights, and repressed their leading figures as state criminals. It also constituted an extraordinary experiment in government, instituted to deal with a temporary emergency. Paradoxically the architects of this system were not churchmen or reactionaries, but representatives of the most progressive factionsof Nicholas's bureaucracy. Their abandonment of religious toleration on grounds of political intolerability reflected their nationalist concerns for the future development of a rapidly changing Russia. The system lasted only until Nicholas's death in 1855; however, the story of its origins, operation,and collapse, told for the first time in this study, throws new light on the religious and political identity of the autocratic regime and on the complexity of the problems it faced.

"Marsden has made a major contribution to understanding the history of Russian state policy toward religion in general and the Old Belief in particular. A delight to read, this book offers an important perspective on the dilemmas that faced the modernizing Russian state and its enlightened bureaucrats in the mid-19th century. Political scientists and historians of Russia and Europe interested in the development of the secular state will find it stimulating and useful." - Professor Eugene Clay, Reviews in History

I am currently working on a book about the Old Believers from 1825 to 1917.  At the beginning of the twentieth century some estimates suggest that as much as a third of the Russian population were Old Believers, there were certainly many millions.  Their existence posed a dilemma which was perhaps the most widespread and long-lasting internal political problem for the regime. The failure to resolve this national religious division by instituting a lasting basis for freedom of conscience is crucial to understanding how Church and state impeded the development of a liberal consensus in Russia, while the examination of Old Belief on the ground reveals a wider political and legal culture in which the expectations and hopes of millions of Russians were confounded by their government.  I hope that this project will make a considerable contribution to our understanding of the identity and fate of Russia’s tsarist autocracy.  Yet it also requires engaging with the themes of nineteenth-century European history more generally; questions of nationalism, secularisation, and liberalism are central to my work.

Beyond the Old Believers, I am interested in the social and cultural dynamics of life in the Russian provinces, in particular in the influence of merchants. I have also conducted research in Vienna, looking at how religious toleration functioned in the borderlands between the Habsburg and Russian empires.

No publications have been listed.