I am a Research Fellow in Modern History at the University of Oxford, interested in the study of religion and violence.

My publications include a book entitled, Catholicism and the Great War: Religion and Everyday Life in Germany and Austria-Hungary, 1914-1922 (Cambridge: Cambridge University Press, 2015), which was awarded the Fraenkel Prize of the Wiener Library.

My research interests are classical and contemporary themes that put the global with the local, particularly regarding ideology and culture in war and peace. I am currently working on a book project that is a global history of the Catholic Church during the First World War.

Since 2016, I have been a member of Oxford's "Globalising and Localising the Great War" project and its research focus of "Global Religions," for which we have received major multi-year funding from the Arts and Humanities Research Council of the United Kingdom (AHRC).

I am pleased to be contacted about my scholarly interests, both for academic and public purposes.

My first book, Catholicism and the Great War: Religion and Everyday Life in Germany and Austria-Hungary, 1914-1922, is a transnational, comparative study that challenges elite, state-centred instrumentalist readings of religion. Through extensive archival research in Central Europe, including the Vatican Archives, I portray an everyday history of Catholic believers beyond the pope, bishops, and clergy—thus, a family history that includes soldiers as well as women and children.  Challenging a religious history of “chosen people” nationalism dominated by Protestant Prussia, I argue that Catholics in the losing powers used their faith to cope with the war’s horrors much better than standard cultural narratives of secularization and literary modernism would have us believe.

My other publications include articles in the peer-reviewed digital encyclopaedia 1914-1918-Online http://www.1914-1918-online.net/index.html  as well as book chapters and articles in peer-reviewed journals such as Central European History and First World War Studies.

Since 2016, I am a member of the “Global Religions” section of Oxford’s “Globalising and Localising the Great War” project, funded by the AHRC. I am researching a book monograph that is a global history of the Catholic Church in the First World War. Putting the global with the local, this new book is a transnational study that challenges standard accounts dominated by elite actors, nation-state frameworks, and the chronology of 1914-1918.  I put European and US religious developments in dialogue with the Global South.

This project incorporates archival research across the globe, including the Archivio Segreto Vaticano. I am interested in representing beliefs of global religious communities beyond the standard depictions of the clerical hierarchy, though keeping the clergy’s agency firmly in mind. My work draws on theories from the history of everyday life as well as more recent developments in the history of emotions and the senses.

I have given invited talks including keynote lectures at various forums around the world including the Institute for Religion and Peace (Vienna), the National Endowment for the Humanities (Cincinnati, USA), the National World War I Museum (Kansas City, USA), and the Kandersteg Seminar of the Remarque Institute at NYU (Switzerland).

I am happy to be contacted about my scholarly interests, both for research collaborations as well as public media events that are of central importance during the centenary anniversary reflections on the First World War and its modern legacies. 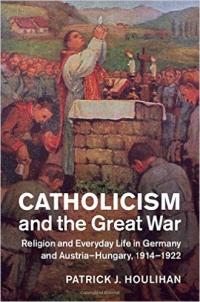