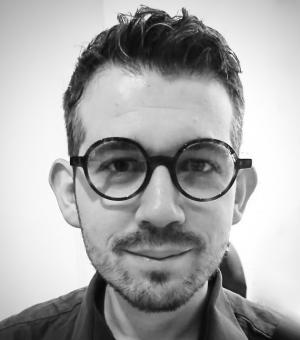 I am Departmental Lecturer in Early Modern History and a Research Fellow at Wolfson College. My research focuses on the Catholic Church during the Counter-Reformation and I have published two monographs, Pius IV and the Fall of the Carafa (Oxford University Press, 2013) and Electing the Pope in Early Modern Italy, 1450-1700 (Oxford University Press, 2017). I am currently writing a global history of the Catholic Church from the Council of Trent (1545) to Vatican I (1870) and editing two volumes of the Cambridge History of the Papacy. 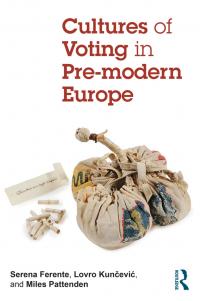 Cultures of Voting in Pre-modern Europe examines the norms and practices of collective decision making across pre-modern European history, east and west, and their influence in shaping both intra- and inter-communal relationships.

Bringing together the work of twenty specialist contributors, this volume offers a unique range of case studies from Ancient Greece to the eighteenth century, and explores voting in a range of different contexts with analysis that encompasses constitutional and ecclesiastical history, social and cultural history, the history of material culture and of political thought. Together the case-studies illustrate the influence of ancient models and ideas of voting on medieval and early modern collectivities and document the cultural and conceptual exchange between different spheres in which voting took place. Above all, they foreground voting as a crucial element of Europe’s common political heritage and raise questions about the contribution of pre-modern cultures of voting to modern political and institutional developments.

Offering a wide chronological and geographical scope, Cultures of Voting in Pre-modern Europe is aimed at scholars and students of the history of voting and is a fascinating contribution to the key debates that surround voting today. 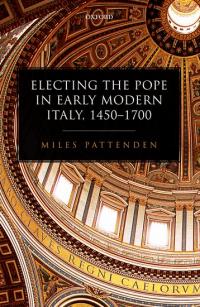 Electing the Pope in Early Modern Italy, 1450-1700 reassesses the history of early modern papacy through the first major analytical study of the papal election in English. Papal elections, with their ceremonial pomp and high drama, are compelling theatre, but, until now, no one has analysed them on the basis of the problems they created for cardinals: how were they to agree rules and enforce them? How should they manage the interregnum? How did they decide for whom to vote? How was the new pope to assert himself over a group of men who, until just moments before, had been his equals and peers?

This study traces how the cardinals’ responses to these problems evolved over the period from Martin V's return to Rome in 1420 to Pius VI's departure from it in 1798, placing them in the context of the papacy's wider institutional developments. Miles Pattenden argues not only that the elective nature of the papal office was crucial to how papal history unfolded but also that the cardinals of the fifteenth to eighteenth centuries present us with a unique case study for observing the approaches to decision-making and problem-solving within an elite political group.

The Spanish Presence in Sixteenth-Century Italy: Images of Iberia (Ashgate, 2015) 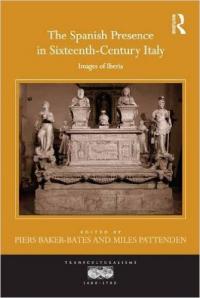 The sixteenth century was a critical period both for Spain’s formation and for the imperial dominance of her Crown. Spanish monarchs ruled far and wide, spreading agents and culture across Europe and the wider world. Yet in Italy they encountered another culture whose achievements were even prouder and whose aspirations often even grander than their own. Italians, the nominally subaltern group, did not readily accept Spanish dominance and exercised considerable agency over how imperial Spanish identity developed within their borders. In the end Italians’ views sometimes even shaped how their Spanish colonizers eventually came to see themselves. The essays collected here evaluate the broad range of contexts in which Spaniards were present in early modern Italy. They consider diplomacy, sanctity, art, politics and even popular verse. Each essay excavates how Italians who came into contact with the Spanish crown’s power perceived and interacted with the wider range of identities brought amongst them by its servants and subjects. Together they demonstrate what influenced and what determined Italians’ responses to Spain; they show Spanish Italy in its full transcultural glory and how its inhabitants projected its culture - throughout the sixteenth century and beyond.

Pius IV and the Fall of the Carafa: Nepotism and Papal Authority in Counter-Reformation Rome 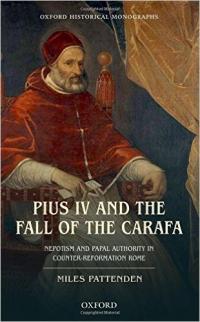 Drawing from new archival research, Pius IV and the Fall of the Carafa shows how the popes of the mid-sixteenth century sought to re-assert and project their authority over the Catholic Church during the first phase of the Counter-Reformation. Its narrative focus is the trial of cardinals Carlo and Alfonso Carafa, nephews of Paul IV (1555-1559), who, together with Carlo's brother Giovanni, were arrested and indicted by their uncle's successor Pius IV (1559-65) on charges of murder, theft, and corruption. Taking place from June 1560 to April 1561 as preparations were underway for a resumption of the Council of Trent, this was the only occasion in the early modern period in which a papal family were impeached for their actions in government. It provided a well-publicized forum in which questions about the nature and extent of the pope's authority were raised, contested, and answered by different groups within the Roman political and ecclesiastical elite.

While the Carafa trial has previously been understood to have been primarily of importance only to the development of papal nepotism, Miles Pattenden now demonstrates how Pius used it as a vehicle by which to intimidate the College of Cardinals and to re-impose stricter hierarchical control over the institutions of the Catholic Church.

My current research project explains how the Catholic Church became one of the largest organizations in human history with the widest geographical reach in the early modern period. Between 1400 and 1870, the Church established its presence on all six of the world’s populated continents and its members transformed Catholicism from a local variant of medieval Christianity to a sophisticated multi-ethnic confession which proved an effective vehicle for colonial enterprises and state-building.

My project explains how all this was achieved by identifying the institutions and processes which held this far-flung edifice together. It discusses five pillars on which the Church was founded: ‘office’, ‘doctrine’, ‘law’, ‘property’, and ‘obedience’.

All five had ancient origins, but also complex histories which reflected their evolution as solutions to existential problems.

New ways of thinking about the Church, and of conceptualizing its components, in the early modern period created a context in which it could expand across the globe, but also transformed it into a more complicated and paradoxical organism than hitherto: larger and richer yet simultaneously highly fragmented and decentralized, more invested in the pope’s authority yet at the same time more dependent on the secular state, in the vanguard of forging global connectedness yet struggling to articulate – let alone fulfil – the universal mission it proclaimed.

My research describes those paradoxes and uses the Church as a unique case study for understanding the nature of early modernity, the impact of religious ideology, and the dynamics of geo-politically complex organizations.

I would be willing to hear from potential DPhil students regarding Early Modern Italian or Spanish History, the History of Catholicism