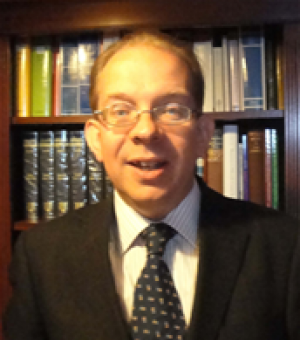 I am a cultural and intellectual historian of the late Middle Ages and Renaissance across Europe, including the British Isles. In my research, I use the material evidence of surviving manuscripts to trace the movement of texts and ideas across the shared civilization of Europe, and that requires me also to be a palaeographer and codicologist. It also requires me to make frequent research trips to Italy, a fate I endure with stoicism. In addition, I am Oxford’s Academic Director for the Europaeum MA, a collaboration between ourselves, Leiden and the Sorbonne.

There are two related elements to my research. The first is the circulation of ideas within late medieval and early modern Europe. Specifically, I study the international success of the intellectual activities we know of as Renaissance humanism. I trace that success through the production, movement and use of books, mainly manuscripts but also early printed volumes. Central to my research is that we can use the material evidence of these books to provide a new interpretation of the ‘diffusion’ of the Renaissance: that is, by paying attention to the script, illumination, annotations and ownership marks, we can pinpoint more precisely where and by whom these works were known – and these details can blossom into exciting insights. I argue this most fully in my forthcoming monograph, The Renaissance Reform of the Book and Britain (Cambridge University Press).

This methodological approach, using palaeography and codicology to ask historical questions, has been the spur for the second element in my work: the study of the cultural importance of manuscript collections in the Middle Ages and in the early modern world. This is reflected in three topics I am studying. First, I have an on-going project to reconstruct the library of Humfrey, duke of Gloucester (d. 1447). Second, I have launched an online project, Lost Manuscripts, which catalogues fragments of manuscripts with the intention of our understanding better the process of destruction which they underwent in early modern England. Third, I am interested in the nature of the early modern library as a repository for medieval manuscripts – and for so much more! This interest is reflected in my contributions to the recently-published catalogue of the manuscripts of Christ Church, Oxford, which is being followed by a public exhibition, ‘More than a House for Books’.

I also occasionally blog about my research at my website, Bonae Litterae. 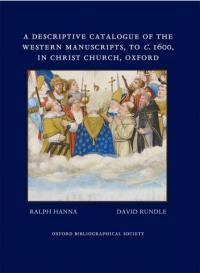 The Oxford Bibliographical Society is pleased to announce the publication of the second in its Special Series of Manuscript Catalogues. The volume is A descriptive catalogue of the western manuscripts to c. 1600, in Christ Church, Oxford by Ralph Hanna and David Rundle.