I am a Postdoctoral Research Fellow on the ERC-funded ‘Music and Late Medieval European Court Cultures’ research project (MALMECC). My current project focused on the curial life of the Avignon cardinals between 1378—the election of a second pope, Clement VII—and 1403—the flight from the pope Benedict XIII from his Avignon palace.

I also have a great interest for the ways in which warfare and knighthood evolved at the end of the Middle Ages and for the political history of the episcopal principality of Liège.

My research focuses on the still poorly-known cultural life of the cardinals who lived in Avignon during the early stage of the Western Schism. Cardinals have always been overshadowed by popes’ figures. From the early Middle Ages to the current days, authors have tended to confront an individual and well-known and studied individual—the pope—with a faceless, allegedly uniform and somewhat shadowy group—the cardinals. Yet, we know surprisingly little about the latter’s identities, political objectives, and cultural practices.

The case of Avignon-based courts between the beginning of the Great Western Schism, in 1378, and Benedict XIII’s flight from the city in 1403 proves to be particularly challenging. On the one hand, we can observe how cardinals’ attitudes evolved and adapted to European powers’ shifts of obedience, such as the French withdrawal of obedience of 1398. On the other hand, the competition between Avignon and Rome was the opportunity to seek to define the identity of the center of the Christendom and the role the princes of the Church would play in it, both politically and, what will be my main focus, culturally.

There are two main objectives in this project that I want to fulfil. First, I want to offer the first thorough study of these curiae of cardinals, which are most of the time overshadowed by the pope’s curia. To do so, I will combine a prosopographical, sociological, and network theory-informed approach to courts. The incredible wealth of the pontifical Avignon archival material will give me access to the careers of cardinals’ officers, friends, and family members. The exchanges that occurred between different cardinals’ households or between a cardinal’s familia and the papal household will be of particular interest. Cardinals’ curiae will thus be investigated as groups or institutions able to produce their own original (micro-)culture—a mix of papal, ecclesiastical, familial, princely, and nobiliary influences.

Second, I would like to challenge the idea of a static community of princes of the Church. We know that the Western Schism was a period during which the role of cardinals was being redesigned and this evolution led to, amongst other things, the emergence of “conciliarist” theories that considered the pope as submitted to the council, i.e. the cardinals. Although cardinals saw their power increase in this context, they have rarely been examined as individuals, heads of their own party, household, personal and cultural life, able to challenge the pope’s alleged central role in cultural exchanges in Avignon, and ultimately his power vis-à-vis the cardinals of his obedience. The cultural choices made in the hiring of artists and singers will be key to assessing the cultural agency of arts and music in cardinals’ courtly life and political self-representation. This has to be more thoroughly studied and combined with a multimedial approach—including palace decoration, musical or reading practices, for example—, performativity, including its material aspects—e.g. in the conduct of masses and ceremonies—together, this will bring forth how late medieval cultural practices helped to establish, or defend political power and influence.

Finally, at the end of the project, I will assess the importance of the trans-national character of cardinals' courts. We know that with the Schism the papal Curia became less geographically limited and gathered more prelates who did not come from Italy or France, but from other regions. But we still ignore if this shift was accompanied by a change towards the self-construction of cardinals as pan-european princes, able to gather cultural influences from several regions in their own courts. 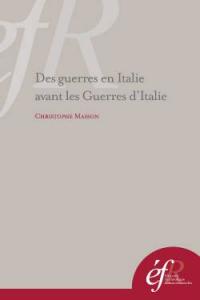