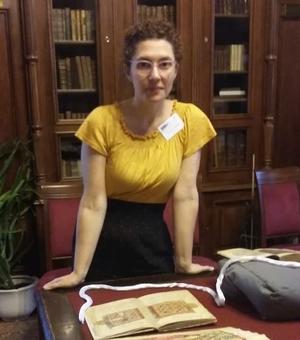 My research and work primarily focus on the history and development of libraries, book culture and the philosophy of classification of knowledge in the Middle East. I work with library collections and catalogues with a focus on Arabic manuscripts, Arabic early prints and Arabic documents. My approach it to look at how material elements of book culture influenced the cultural production, both written and oral, in the Arabic language at different historical times.

I was awarded a Ph.D. in Near & Middle Eastern Studies by SOAS, University of London, with a thesis entitled: "Poetics of the Catalogue: library catalogues in the Arab provinces of the late Ottoman period" (May 2018). My Ph.D. dissertation proposes a new approach to the study of library catalogues, which considers library catalogue as a poetic list (Eco, 2012) distinct from other literary texts at the level of authorship (those compiling the catalogues), readership (library users), spatiality (interaction with the physical space of the library), materiality (interaction with the materiality of the books), and epistemology (how the catalogues organise knowledge). This research examines the specificities of these elements by comparing four library catalogues produced in three cities (Jerusalem, Medina and Aleppo), which were located in the Arab provinces during the late Ottoman period. From this study, I articulated two arguments: first, that catalogues have limits of representation as historical documents because they are texts, and therefore consist of a unique language, narrative and structure; and second, that approaching the catalogue as a literary text offers the possibility to look at its poetics, which are derived from the specific elements that make catalogues a unique type of poetic list. This thesis contributes to knowledge at several levels. Theoretically, it offers a new approach to library catalogues by considering them as poetic lists. At the methodological level, it presents a new approach to the textual analysis of library catalogues, based on data analytical tools. In terms of source retrieval and circulation, it highlights understudied primary and secondary sources. And finally, the ultimate outcome of this research is to shed light on unexplored aspects of cultural production in the Arab provinces during the late Ottoman period. The results of my research had been channelled in different directions and produced various outputs. I published “History of Libraries in the Islamic World: A Visual Guide” (Fano: Gimiano Editore, 2016) and shared the results of my research at symposia, workshops and bespoke lectures.