A special reception for our alumni community will be taking place in the North School following this lecture.  If you would like to attend, please contact comms@history.ox.ac.uk 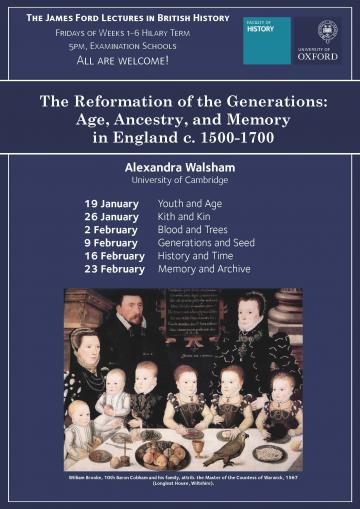 The final lecture examines memory and its transmutations over the course of the several generations that experienced England’s long and contested Reformation. It will investigate when and why men and women sought to record the religious changes they had witnessed and in which they had participated, and the forms in which they transmitted these recollections to posterity as legacies, including written and printed texts, oral tradition, and material objects handed down as heirlooms. It will examine what they strategically forgot as well as what they remembered and how they retrospectively recast and selectively edited their own lives as their religious and cultural preoccupations changed over time. As well as engaging with recent work about early modern memory, it also seeks to evaluate the role of the family and of generational transmission in creating the very archives and libraries through which our own knowledge of the Reformation past is filtered, and the interpretative paradigms that shape how we analyse it.

Lecture One: Youth and Age