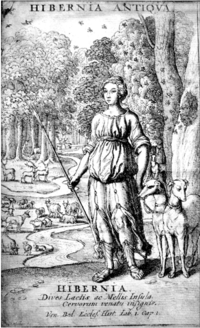 The illustration depicts Hibernia as both shepherdess and huntress, with bees – the symbols of industry and colonization – circling her head and Irish wolfhounds at her side.  This, and the accompanying contrasts between the wild forests and the cultivated arable and pastoral lands represents many of the themes that are explored in these lectures which re-examine Ireland’s role in empire through the lens of early modernity.

The focus will be on Ireland and the First English Empire (c.1550-1770s) but it is critical, where possible and appropriate, to look to other European and global empires for meaningful comparisons and contrasts.  These lectures draw on a wide range of written, visual, and archaeological sources while works of poetry, prose, and performance help to recapture emotions and more nuanced senses of identity.

Four interconnected themes underpin the series. First, as England’s first colony, Ireland formed an integral part of the English imperial system. Second, as well as being colonised the Irish operated as active colonists in the English and other European empires. Third, the extent to which Ireland served as laboratory for empire in India and the Atlantic world is analysed.  Finally, the impact empire had on the material and mental worlds of people living in early modern Ireland is examined alongside how these years are remembered today.

This lecture looks at the Irish, Catholic and Protestant, as agents of empire who played active roles in European global expansionism. By 1660 Irish people, mostly men, were to be found in the French Caribbean, the Portuguese and later Dutch Amazon, Spanish Mexico, and the English colonies in the Atlantic and Asia where they joined colonial settlements, served as soldiers and clergymen, forged commercial networks as they traded calicos, spices, tobacco, sugar, and slaves.  How did these encounters and experiences shape their identity and how did others perceive and represent them?  Equally, how might this hibernocentric perspective challenge, complicate and even change received understandings of empire, especially the English one?

The recording of this lecture will appear here at 17:00 on Friday 12 February 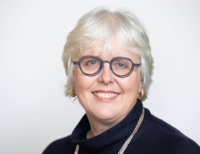 Professor Jane Ohlmeyer, MRIA, FTCD, FRHS, is Erasmus Smith's Professor of Modern History (1762) at Trinity College Dublin. She was Director of the Trinity Long Room Hub Arts and Humanities Research Institute (2015-20) and has been a pioneer in advocating for Trinity’s Arts and Humanities both nationally and internationally.  Since 2015, she has been chair of the Irish Research Council, an agency that funds frontier research across all disciplines.   She was a driving force behind the development of the Trinity Long Room Hub and the 1641 Depositions Project.

Professor Ohlmeyer led Trinity’s bid as part of a consortium of partners for the successful award of €1.5 million for the project ‘Shape-ID’ (2018-21), ‘Shaping Interdisciplinary Practices in Europe’, funded by European Commission’s Horizon 2020 programme.  She is also the PI for the Marie Curie Sklodowska Actions Co-fund, Human+ (€2.8M), which is in partnership with the Adapt Centre (2020-25). The application was ranked second in Europe and places the human at the centre of technological innovation.  Between 2017 and 2020 she led the Mellon Foundation funded Global Humanities Institute on the ‘Crises of Democracy’, involving a global and interdisciplinary consortium of academics from Trinity, University of Zagreb, Central European University in Budapest, Jawaharlal Nehru University in New Delhi, São Paulo University, and Columbia University in New York.

Professor Ohlmeyer is the author or editor of numerous articles and 11 books, including being the editor of Volume 2 of The Cambridge History of Ireland, published in 2018, and launched by the President of Ireland Michael D. Higgins in Dublin, and by President-elect Joe Biden in the United States.  Her most recent book is an edition of Edward Hyde, earl of Clarendon’s A Short View of the State and Condition of the Kingdom of Ireland … (Oxford, 2020).  She is currently working on a book on ‘Ireland, empire and the early modern world’ which she will give as the Ford Lectures in Oxford (2021).  She has served as a Trustee of the National Library of Scotland and the Caledonian Research Foundation, was a member of the Council of the Royal Historical Society,  President of the Irish Historical Society, and was a non-executive director of the Sunday Business Post.  She is a Member of the Royal Irish Academy, of the Irish Manuscripts Commission, and of many editorial and advisory boards.  She has served on the Consortium of Humanities Centres and Institute’s international advisory board from 2017 to 2020.