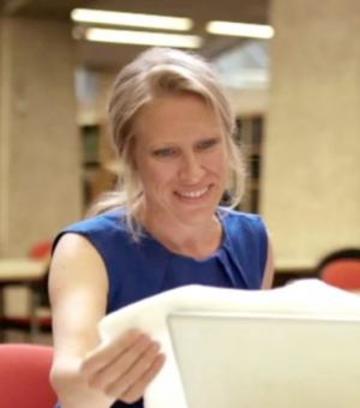 Olivia's doctoral research focuses on migrant domestic workers to London from 1880 to 1939, the history of thousands of ordinary women who travelled vast distances, unaccompanied, to work as servants in British households.

For centuries, Indian girls were hired by the wealthy British families to care for their children as nursemaids and nannies, called ayahs, and by the late nineteenth century ayahs were a key feature in British households in India. They were also a regular sight on board ships, where they were employed to care for and entertain their charges during long sea journeys, telling them stories, playing games and attending to their every need.

Helen Allingham, 'The Governess and the Ayah on the Beach'

When the British took over India after the 1858 uprising, it populated it with civil servants, usually men, who also needed wives. These wives, called memsahibs (‘mem’ derived from ma’am and ‘sahib’ was the male form), were usually born in Britain then moved to India when they married.  When they began to have children in India they required others to help in the household and look after their children for them. Among the wealthy Indian population, most servants were male (including child-carers), but the British memsahibs insisted on female servants to look after their children. Ayahs therefore tended to be the only women working as servants in British homes in India (other women tended to be outdoor servants).  Many of these women were older, often widowed, so they had already had children and knew how to deal with them, but their employers were encouraged to treat them like children, and accused them of being too soft on their charges. Employer attitudes towards ayahs (and Indian servants in general) could be very unkind, though memsahibs relied heavily on them to help raise their children. The children spent so much time with their ayahs that they were often able to speak their ayah’s language as well as English.

The climate and conditions in India could be very harsh, and children’s health and moral education was thought to suffer if they stayed there too long. Ayahs were not seen to have a positive influence on children as they grew older either. As a result, most British families who could afford to sent their children to boarding school in Britain sometime before they were 7. Some of these children had never been to Britain before, and others had only visited a few times. Many years afterwards, these children wrote about how much they had loved their ayah, and how much they missed her (and India) once they were sent to Britain. These childhood bonds appear to have been very strong, but most children never saw their ayahs again.

Shipping improved during the nineteenth century. It used to take four to six months to travel from India to Britain but by the end of Victoria’s reign this had dropped to about 3 weeks thanks to the shortened journey through the Suez canal (1869) and technological advances in shipbuilding. This encouraged British people living in (or sent to) India to visit England more often. British families would often travel back to England to visit relatives or to take their children to boarding school. Some families took their own ayahs with them; others hired specialised ayahs just for the ship journeys. They needed to have good sea legs, be trustworthy and good with children; for that they were paid high wages compared to those who stayed in India, and given some extra money to buy warm clothes. On board the ship, British servants (such as lady’s maids, or governesses) stayed in cabins with their employers, but ayahs were expected to sleep ‘on deck’ – either among the ‘natives’ or sleeping on rolled up mattresses in the corridors outside their employers’ cabins.

Once they docked in Britain, some ayahs accompanied their families on their visit, and others were sent to a home where they would wait to be taken back again. The Helen Allingham's portrait was painted in the early 20th century of a memsahib, children and an ayah at the seaside on the Isle of Wight. Although an uncommon sight outside London, this was likely not the only trip this ayah had made to Britain. Many of these women made the trip many times in their lifetimes, sometimes twice a year, and sometimes took charge of children on their own.

Lachhi was born in 1896 in Bakloh, a hill station in north-western India, now on the Pakistan border. Over the course of her life she worked for many families as an ayah. In 1920, newly married Mrs Christie was moving out to India to join her husband along with her six-month-old baby Eileen. Mrs Christie’s husband, a major in the Indian army, was not travelling with them, so she hired Lachhi to care for Eileen on the journey from London to Bombay. Perhaps Mrs Christie was nervous of a long journey alone with a child to cope with.

On another occasion, Lachhi travelled from Bombay to London on the Viceroy of India ship, arriving in April 1935, looking after the Marshall family’s children before staying with them for the summer in Frimley, Surrey. In the autumn, she then returned with two of the Marshall children, Jeremy and Peter, aged 3 and 1, and their mother, travelling together from Liverpool to Calcutta. The family stayed in a first class cabin while Lachhi stayed on deck. Although Mr Marshall didn’t travel with them, we know from other passenger lists that he was a merchant, and the family lived in India. The previous year, the parents travelled with four sons but as the two eldest (John and Julian) did not return with the family in the autumn, it is likely they stayed behind at boarding school.

We don’t know what happened to Lachhi in the end. It is likely she saved some money for her family and returned to India. But there were thousands of women like Lachhi who made the sometimes dangerous journey to and from Britain, building the Empire from the bottom up.

This resource explores Empire at a very personal level, beyond trade, administration or politics: that which was experienced by children and their Indian nannies. It invites students to consider how the Empire affected individual, emotional ties between Indians and the British, something that complicates the idea of ‘us’ vs. ‘them’. It gives them the opportunity to identify with newcomers to an area, and to debate the many ways to describe and experience migration: were memsahibs migrants to India? Did ayahs know Britain better than their charges did? Did the children feel at home in Britain? etc. It also opens up space to talk about racism and the way the ayahs were treated separately to their white counterparts by adults (but possibly not by children). Overall, it engages with the historical interpretations of (women’s) victimhood and agency, and the positive and negative effects on ordinary people of the British in India.

Rulers and ruled in the British Empire: https://youtu.be/55vD_-fJ_jI

Victorian values and the role of Memsahibs in the British Empire: https://youtu.be/oeMwo8ulpxs