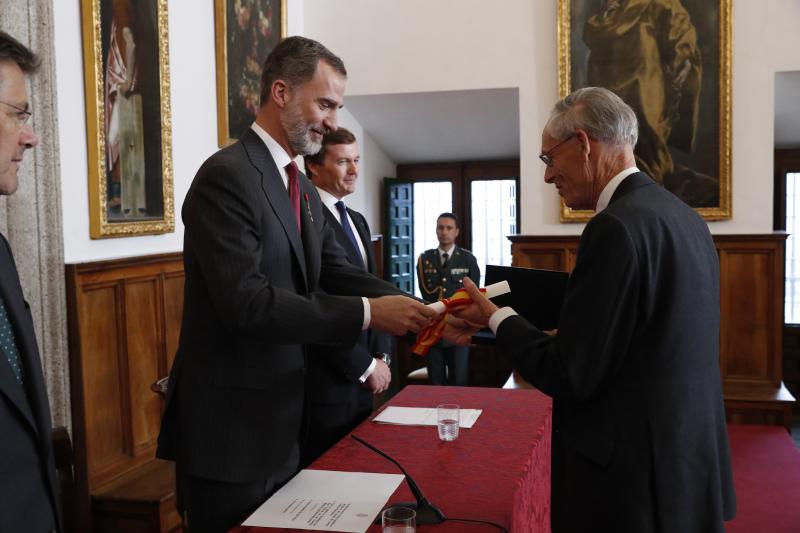 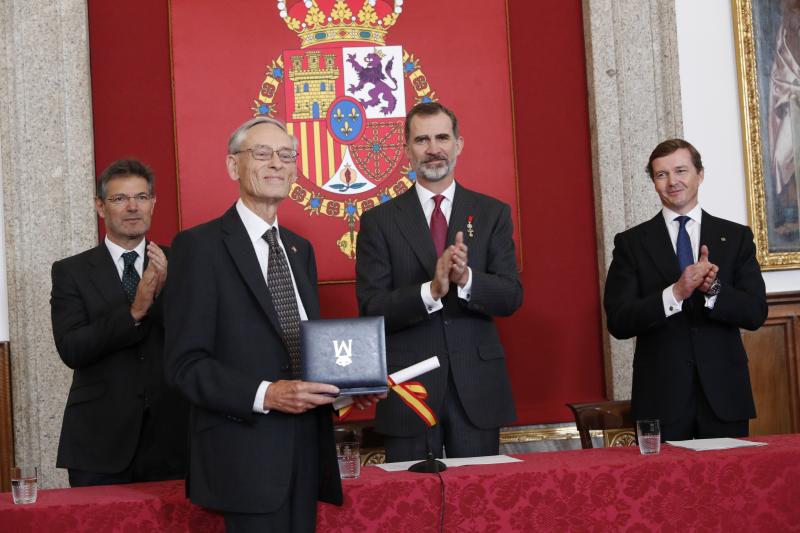 King Felipe VI of Spain has presented Sir John Elliott with the Premio Órdenes Españolas award in recognition of his outstanding achievements in the field of Hispanic history. The prize-giving ceremony took place in El Escorial (Madrid) on 25 May 2018 and his Majesty the King praised Sir John for his rigorous and objective approach to Spanish History.

Premio Órdenes Españolas is an annual prize open to historians of any nationality some part of whose work is related to Hispanic civilisation and it is worth 60,000 euros. The award (given for the first time) was established earlier this year by the Spanish Orders of Chivalry: Santiago, Calatrava, Alcántara and Montesa. Founded in the XII century and currently presided over by his Royal Highness Pedro de Borbón Dos Sicilias, Duke of Calabria, these Orders are a historical expression of Spain’s regional diversity, its common heritage and shared values. They play an important role in promoting historical research and the knowledge of Spanish history and culture.
Sir John was nominated by the History Faculty, University of Oxford, and the selection process for the award involved nominations from over 30 different universities.
Born in 1930, Sir John graduated in history at Trinity College Cambridge, where he is an Honorary Fellow. He held posts at Cambridge University, King’s College, London, and the Institute for Advanced Study, Princeton before moving to Oxford in 1990 to become Regius Professor of Modern History. He retired in 1997. His honorary doctorates include degrees from Cambridge, London, Brown, and several Spanish universities, and he is an Honorary Fellow of Oriel College and Lady Margaret Hall.
Sir John received the Prince of Asturias Award for Social Sciences in 1996, has been decorated by the Spanish government on numerous occasions and is a trustee of the Prado Museum. He was also winner of the Wolfson Prize and the Balzan Prize for early modern history, and was knighted for his services to history in 1994.
His publications include The Revolt of the Catalans (1963); Imperial Spain (1963); Europe Divided, 1559–1598 (1963); The Count-Duke of Olivares (1986); A Palace for a King – with Jonathan Brown  (2003); Empires of the Atlantic World (2006); Spain, Europe and the Wider World, 1500–1800 (2009); and History in the Making (2012). His latest book, on the highly topical subject of Scots and Catalans, will be published by Yale University Press in July this year.