Hidden Histories in the Archives 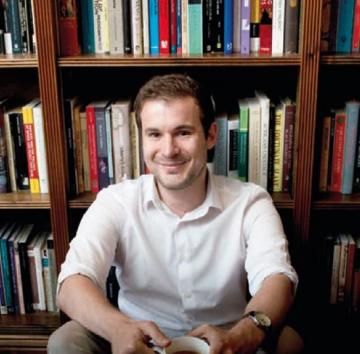 Ryan Hanley had his initiation into the historical craft at a younger age than most. While many historians can only dream of stumbling across a lost gem in an archive, Ryan can vividly describe the moment this happened to him, during his undergraduate degree in English Literature.

‘We did a second-year dissertation, and we were given a list of subjects to choose from,’ he explains. ‘One of them was James Albert Ukawsaw Gronniosaw, who was the first published black author in Britain. His autobiography, A Narrative of the Most Remarkable Particulars in the Life of James Albert Ukawsaw Gronniosaw, An African Prince, appeared in Bath in 1772, and went through at least nine editions by 1811. Intrigued, I tried to find out more and discovered not much was known about him.’

Finding this lack of knowledge strange, Ryan headed to the archives at Westminster College in Cambridge. ‘It was the first time I’d ever visited an archive, and I just got the bug,’ he says.

And it’s not surprising that he got hooked – in the archive, Ryan made a significant find. ‘I unearthed a letter, written by Gronniosaw, which had been misfiled for possibly over a hundred years. Being the only known sample of his handwriting and correspondence in existence made it quite exciting.’

Fast forward a few years, and Ryan is now the Salvesen Junior Fellow at New College. Gronniosaw hasn’t left him. Buzzing from his discovery, Ryan went on to complete a master’s degree in Eighteenth Century Studies at the University of York and then a PhD at the Wilberforce Institute at the University of Hull, focusing on black writing in Britain. This completed his shift from English Literature to black British history. ‘So all the way from that undergraduate research project I went on to do this PhD,’ he says.

Ryan is excited to be part of the growing field of black British history. ‘We know a lot about slavery, and abolition, but we don’t know very much about black agency or the role of black intellectuals,’ he explains. This includes Gronniosaw, but there are a host of others: Ryan’s PhD, which is in the process of becoming a monograph, explored the lives of eight black autobiographers between 1770 and 1830.

Following on from his PhD, Ryan’s current project takes another step towards illuminating black British history. This, too, was sparked by an unlikely experience.

‘I was inspired by looking at what happened around Brexit and Donald Trump,’ Ryan says. An unusual motivation, perhaps, but he astutely connects the dots. Visiting his local pub in his hometown of Bristol, Ryan sensed a change in how people spoke about British political identity. ‘I was shocked by how emboldened people were to talk about Englishness as though it were a racial category.’ Intrigued, Ryan picked up the thread and followed it into the archives.

‘I looked at some old printed materials by radical heroes like William Cobbett, and I saw that same phenomenon – the pairing between Englishness and whiteness,’ he explains.

His current project, then, explores ethnicity and nationalism in working- class print culture, as well as the role of black intellectuals working in the radical movement. It’s a new project, but is still rooted in Ryan’s desire to illuminate less commonly known elements of British history.

This desire has also led him to work with local and community historians in both Bristol and Oxford. Ryan has worked with the African Caribbean Kultural Heritage Initiative (ACKHI) in Oxford to promote public talks and workshops as part of their African History Season. He has also worked with community history groups in Bristol, exploring the local history of slavery.

Ryan hopes both academics and communities alike can bene t from working together, and that the field of black British history will grow to occupy its rightful space. ‘It just comes back to this being a type of history that people care about and is important to people,’ Ryan concludes.