The Cult of Saints: Field Trip to Rome

Bryan Ward-Perkins writes: In September last year six members of the Cult of Saints project teamed up with three members of the Warsaw-based ‘Presbyters’ project, and went on an intensive five-day visit to Rome. The purpose of this visit was to familiarise ourselves with the physical evidence for the early cult of saints, and there is nowhere better to do this than Rome, with its quite extraordinary collection of catacombs, excavated cemeteries, early churches, inscriptions,and mosaic and fresco depictions of the saints, all supplemented with rich contemporary documentary evidence and unique levels of modern scholarly engagement. 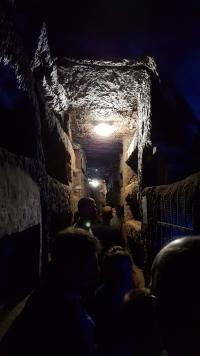 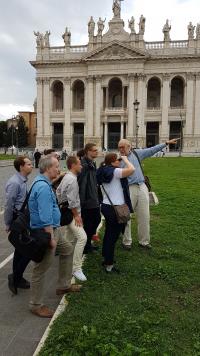 In the course of our five days we covered huge distances on foot (since this is the best way of forming an impression of the city’s topography, pre-Christian and Christian), and visited most of the highlights of early Christian Rome, including the excavations under St Peter’s and some twenty churches.  I had the good fortune to be born and brought up in Rome, and therefore had some familiarity with almost everything we saw – but seeing these monuments in an group was deeply enlightening, since, at every site, at least one of our number was guaranteed to know something I didn’t.  For instance, in S. Maria Maggiore I learned more about the fifth-century nave mosaics (and some fairly obscure passages in Genesis) than I had ever dreamed was to be known!

The high points of our fieldtrip were definitely: our visit to the newly reopened S. Maria Antiqua on the Forum (which coincided with an excellent exhibition about its early medieval frescoes and their context); a private tour of the catacombs of Domitilla, Calixtus and S. Sebastiano, accompanied by two great experts on these, Antonio Felle and Donatella Nuzzo; and a visit to the Congregatio pro Causis Sanctorum, the present-day Vatican office where the cases for possible new saints are carefully scrutinised.  Here Father Zdzisław Kijas OFMConv, who works for the Congregatio, took us very thoroughly and patiently through the modern process of vetting an application.  There are of course huge differences between the careful legalistic procedures of the modern Vatican, that have slowly evolved since the twelfth century, and the very informal processes of early centuries, that are our area of study.  But some central things have remained unchanged, such as the Church’s concern over unregulated cult, and the need for miracles to prove that a saint has intercessionary power.

We left Rome, as we had hoped, with a good understanding of the city’s remarkable physical evidence for saintly cult – cult that had built a string of impressive churches over the graves of the martyrs, including the massive basilicas of Old St Peter’s and St Paul’s, and had created the stunning mosaics of SS Cosma e Damiano and S. Agnese fuori-le-mura.  But, more than knowledge of a single city (important though that city is), we took away from Rome a much better understanding of how to read and interpret similar physical evidence from the same period across the rest of Christendom.

A research project on the Cult of Saints from its origins to circa AD 700, across the entire Christian world